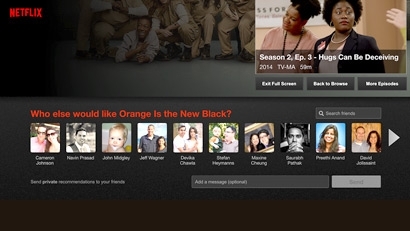 As part of its broader social marketing strategy, Netflix is now encouraging users to recommend particular TV shows and movies to friends and family on Facebook.

“When you finish watching something, you’ll be asked if you know anyone else who’d like that show, and prompted to find your friends by connecting to Facebook,” Cameron Johnson, director of product innovation at Netflix, explained in a blog post on Tuesday.

Appearing to put an emphasis on privacy, Johnson added: “Connecting will not post to Facebook or share what you watch to your friends’ News Feed.” Yet, “the new feature … doesn't emphasize private messaging,” a Netflix spokesman noted on Tuesday. “The user sees recommendations in a variety of ways, including on the Netflix homepage on television and mobile devices.”

Netflix is adding the new feature to its Web site, along with its extensions on the iPad, iPhone, PS3, Xbox and various set-top boxes and smart TVs.

The new social recommendation feature seems to tie nicely into what Benson called the company’s “awareness, engagement, and signup” strategy.

Netflix reported profits of $71 million in the second quarter -- more than double the profits it put up during the same period a year earlier. The company also said revenue from its streaming content service was up nearly 50% from $837 million to  $1.2 billion, year-over-year.