'Gotham' Is The Best New Show Of The Fall Season 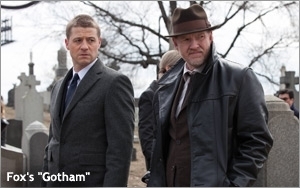 It's a brooding, eye-catching show with its cinematic depiction of the fictional Gotham City as a dark, dangerous, decaying, trash-strewn place -- like the way New York was once depicted in the bad old days of the 1970s and 1980s in movies as diverse as “Death Wish” (1974) and “Escape from New York” (1981).

“Gotham” performs the pretty neat trick of being a TV series about Batman in which Batman, technically, does not even appear. Instead, it’s a pre-Batman series -- an “origin” story of the type comic-book aficionados apparently adore.

This one has the pre-Batman as a preteen Bruce Wayne (played by 13 year-old David Mazouz, who was last seen on Fox in the Kiefer Sutherland series “Touch”) who has not yet become Batman or even Batboy. In the premiere episode seen on Fox Monday night, young Bruce was just a kid -- albeit a very wealthy kid -- who was reacting to the terribly tragic double murder of his parents in an alley in Gotham City’s theater district.

Under the care of his trusty butler, Alfred (Sean Pertwee), young Bruce met a police detective named James Gordon (Ben McKenzie) who vowed to find the killer of Bruce’s parents.  Thus, you have two characters who will be on hand through the remainder of the Batman saga -- Gordon, who will one day be police commissioner, and Alfred, who everyone knows as Batman’s indispensable (and unflappable) advisor and aide. Also seen in “Gotham”: Younger, pre-formed versions of other Batman notables – a pre-“Penguin,” a pre-“Riddler,” a pre-“Poison Ivy” and a teenage girl who Batman fans are predicting will be revealed as the pre-“Catwoman.”

However, there’s where my own knowledge and “expertise” on the Batman saga ends. Why? Because while I was watching this new Batman TV series, I came to the sudden realization that the first “Batman” TV series -- the campy one from the 1960s -- was the first TV show that I was ever fully conscious of. To this day, despite the many “Batman” movies and animated TV shows produced over the years, this old TV show seems to be the only version of “Batman” that ever became lodged permanently in my consciousness, to the exclusion of all others.

Premiering in January 1966, the show was the talk of my first-grade circle on the mornings after its two weekly episodes aired.  It’s my first memory of ever discussing a TV show with anyone else as my first-grade classmates and I spent recess going over and, at times, reenacting Batman and Robin’s struggles with the Riddler, the Penguin and the Joker. “I love what Frank Gorshin is doing with the role [of “The Riddler”],” I picture myself saying then. What can I say?  I was a precocious child destined, apparently, to become a TV critic.

What’s striking to me now is the stark contrast between that old, cartoonish TV show and the way the Batman story is rendered in “Gotham,” and for that matter, all the recent “Batman” movies. Back then, in the 1960s, the developers and producers of the “Batman” series probably never considered making a “serious” version of this comic book-based story.

To them, the only way to do it was, basically, to make it as silly as possible.  Everyone remembers the show for its “Wam,” “Bam” and “Oof!” fight scenes, its dialogue (particularly Batman’s stilted monologues and Robin’s exclamations of “Holy [blank]!”), and its many veteran Hollywood stars playing the show’s many villains – including Cesar Romero as the Joker, Burgess Meredith as the Penguin and Otto Preminger as Mr. Freeze.  Even Batman himself was outfitted for laughs, in a skintight Batman costume through which the pudgy belly of the actor who played him, Adam West, was hilariously conspicuous.

Why bring this up?  Because for “Gotham” watchers of a certain generation – specifically the generation whose first TV memories were formed in the silly ’60s – this new pre-Batman series on Fox has us doing mental exercises that younger viewers of “Gotham” cannot really perform.  The original “Batman” series was so indelible that, when I watch Ben McKenzie as Det. James Gordon, I can’t help wondering how on earth he’ll grow into the Commissioner Gordon of the old “Batman” series, played by Neil Hamilton; or how Robin Lord Taylor, the actor playing the pre-“Penguin” in “Gotham,” will grow into the Burgess Meredith character (or the version played by Danny DeVito in the 1992 movie “Batman Returns”).

Of course, these modern-day characters won’t turn into the campy characters of the old ’60s series.  The two eras -- the 1960s and the 2010s -- couldn’t be more different, particularly where comic books are concerned.

Back then, comic books were just comic books.  Today, they are taken much more seriously – so much so that Batman fans wouldn’t stand for a TV series that made fun of their hero.

And so we have “Gotham,” a serious “Batman” (or pre-“Batman”) that stands out as the most attractive and intriguing of all the new shows that the networks are introducing over the next few weeks.  “Gotham” has been, for the most part, favorably reviewed and it’s been very well-publicized by Fox.

And yet, the total audience for the show’s premiere Monday night was 7.988 million, with a 3.2 rating/10 share in 18-49 viewers from 8 p.m. to 9 p.m., according to the overnights -- third place in both categories (against competition that included the newly moved “Big Bang Theory” on CBS, the season premiere of “The Voice” on NBC, and Week 2 of “Dancing With the Stars” on ABC).

What happens next with “Gotham”? Well, to paraphrase the words that appeared at the end of every cliffhanging episode of the old “Batman” series: “Tune in next week -- same bat time, same bat channel!”

tv
2 comments about "'Gotham' Is The Best New Show Of The Fall Season".
Check to receive email when comments are posted.
Read more comments >
Next story loading