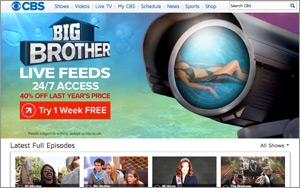 This follows CBS’ smaller sister broadcast network, the CW, which finished its upfront deals on Friday getting 4% gains on CPMs and 15% higher in overall upfront volume to $460 million.

How many dollars for CBS? CBS isn’t saying -- exactly.

“As we near the finish line, we feel confident that when the upfront marketplace comes to a close, CBS will have secured more total dollars — and the highest pricing — of all the broadcast networks,” according to a statement from a CBS spokesperson.

Media agency executives say broadcast networks could see 5% to 10% fewer upfront dollars than a year ago, versus the $8.7 billion to $9 billion take in 2014. CBS pulled in around $2.65 billion for the 2014 upfront market, according to estimates -- not including sports or other dayparts.

CBS did say it was making more deals linked to the C7 metric -- average commercial ratings plus seven days of time-shifted viewing -- transitioning from C3 metric deals, the virtual standard for broadcast networks since 2007. C7 linked deals could mean 1% to 3% more overall dollars for a network.

An CBS spokesperson adds: “Agencies and clients continue to value the strength, stability and delivery that our schedule provides, and are increasingly committing dollars against C7.”

Fox was one the first networks making upfront deals — starting two weeks ago — at pricing hikes much lower than anticipated. Media agency executives say Fox has been making deals at flat pricing to 2% cutbacks versus a year ago.