How Agencies Are Sifting Through The Sea Of Ad Tech 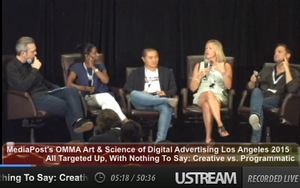 On the “creative vs. programmatic” panel at OMMA LA on Wednesday, the definition of one of those two words proved flexible. And this time, it wasn’t "programmatic."

“Creative” is (naturally) associated with the content of an ad, the panelists said, but their discussions proved that they had to get creative when it comes to sifting through the sea of ad tech as well.

“How do you not spend all of your time falling in love with the next best technology?” asked panel moderator Kevin Ryan, CEO and founder of Motivity Marketing.

Stephanie Spero, director of media strategy and business director of Tribal Worldwide, said it’s all about putting the latest and greatest in tech into perspective. She said the agency looks -- “literally weekly” -- at programmatic technologies and vets them against client goals.

“Clients come to us and say, ‘This is new and sexy,’” Spero said, before adding that it’s then on the agency to see whether or not that “new and sexy” tech actually helps that client meet their goals.

At some point, Ryan argued, clients just get burned out from reading about the “new targeting technology!” of the week. He quipped that the claims keep getting more outlandish, sarcastically saying that according to the promises made by the tech companies, “you can target 12-year-old lesbian labrador retrievers … with four different levels of verification!”

Ian Wolfman, co-founder of Wolfman Group, jumped in to note that different clients will care about certain things with varying degrees of passion. Some brands may just want to see the final results, while others -- such as luxury brands -- are going to be much more protective.

“If Twitter is having issues targeting…” said Wolfman, trailing off, letting conference attendees fill in the blanks. (“Then what the heck can you expect from some lesser media companies?”)

The lure of programmatic ad targeting technologies is strong enough -- and we’re well past the point of no return -- that for most media-buyers, it’s not a question of whether or not to use ad tech, but which vendors to roll with. In the end, the panel had circled back to Ryan’s initial question: “How do you not spend all of your time falling in love with the next best technology?”

“I can’t tell you how many programmatic companies call,” said Kirsten Atkinson, VP of media and branded integration at Walton Isaacson, “so there’s certainly not enough resources to do it all.” She noted that while some agencies do have test budgets -- which makes everything a little easier -- all agencies should put together a process of figuring out what’s worth the risk.

That process is not always perfect, however. As Spero pointed out, Tribal already has a process in the form of weekly “vetting” meetings, but that hasn’t left the agency unscathed. No, they haven’t run into a Nielsen-Twitter-Dick-Picks kerfuffle, but she did say that she's received “a call from a client saying their ad is next to Jake Gyllenhaal’s abs.”

“We have to work with the reputable vendors, but yes, some of that is taken with a grain of salt,” Spero said.

You can see the full panel below:

Broadcast live streaming video on Ustream
ad technology, agency, programmatic
2 comments about "How Agencies Are Sifting Through The Sea Of Ad Tech".
Check to receive email when comments are posted.
Read more comments >
Next story loading