Pope A No-Show In Brooklyn, But VW Confesses Anyway 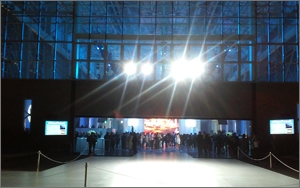 It was cloudy last night, the wind was blowing pretty hard, and it threatened to rain. And then there was the weather outside. Yes, Volkswagen put on its best show face in Brooklyn for the unveiling of the 2016 Passat on Monday evening, a tough act for U.S president and CEO Michael Horn. I heard one guy joke that maybe it should have been held in a St. Patrick’s confession booth, with the Roman Pontiff himself behind the screen.

Given the incomprehensible degree of cyber-dissembling by the company around diesel emissions, a scandal that could completely kill the future of clean diesel in the U.S., could it hurt?

In case you’ve been lost in the Roman catacombs, the EPA claims VW used software tinkering to fake emissions on some half a million of its TDI diesel cars. The deliberate workaround actually detects when the car is being tested for tailpipe effluence, and adjusts those emissions in order to past the test. When not being tested, the cars emit a reported 10 to 40 times allowable legal limits of assorted  pollutants. Regardless of who gets the guillotine at headquarters in Wolfsburg, the company is facing a potential fine of $18 billion, plummeting shares, a major c-suite shakeup, and probably a few dozen class action lawsuits and a Department of Justice criminal probe, shoving a little deeper the knife to the heart of VW's hemorrhaging global reputation.

To Horn's credit, he didn't bloviate when he took the stage. Among the first words to the hundreds of dealers, members of the media, employees, and customers (there as much to see a special performance by musician Lenny Kravitz, as to witness the unveiling of the 2016 model Passat): “We totally screwed up.” And he suggested the company had considered canceling the event in the Duggal Greenhouse in the Brooklyn Navy Yards, bejeweled in blue spotlights for the show.

Said Horn, “Volkswagen has broken the trust of our customers and the public here in America. Let's be clear about this: our company was dishonest…with the EPA, and the California Air Resources Board, and with all of you.” He went on to say how inconsistent this all was with VW's core values of value, innovation and, in this context, reputation. “But we're here to talk about the new Passat.”  An awkward transition, that, but Horn handled the hairpin as adroitly as one could expect.

Before the new Passat, built in VW's Chattanooga, plant, rolled up a long ramp from the riverside terrace and bar that VW had built for the event, Horn said, with no irony, that the company would be known in the U.S. for innovation. It’s true, though. The stuff coming out of VW’s seven-year-old Electronics Research Lab in Palo Alto is pretty impressive: autonomous driving, gesture-control user interface, driver assist, sensor concepts, and telematics are part of that, and Horn noted that the automaker this year made its first-ever appearance at the Consumer Electronics Show in Chicago to show off some of the wizardry.

Karl Greenberg writes about automotive, consumer-packaged-goods, sports, and travel for “Marketing Daily.” Prior to this, he was the automotive editor at "Brandweek" magazine. He was also the Internet advertising technology writer for "Adweek," and petrochemical editor at "Chemical Market Reporter". You can reach Karl at karl@mediapost.com.