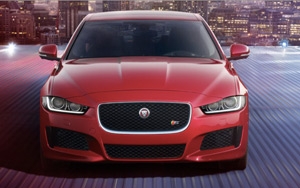 Siblings Jaguar and Land Rover have seen global sales double from 2009 through last year, to 462,678 vehicles. But that is a far cry from the likes for BMW and Mercedes-Benz. And Land Rover has owned most of those salubrious numbers.

The company is hoping to give some mojo to its sports car brand with investments in production facilities and a couple of new products, and a new marketing strategy.

Joe Eberhardt, president and CEO of Jaguar Land Rover North America, says that while Land Rover is, in fact, the fastest-growing U.S. luxury auto marque, the cat has some more stalking to do. According to Eberhardt, who spoke at the monthly International Motor Press Association luncheon last week, the brand is in the process of positioning itself against the major players in the category, but the momentum depends on new products growing the lineup from three to at least five.

On the marketing side, there’s a new tag-line, “The Art of Performance.” And Eberhardt said that the message would be more balanced. Meaning a bit less “British Villain” and its big media commitment (the campaign launched with a 60-second Super Bowl ad last year) and more focus on products and features. Of the campaign, in which famous British actors embodied what’s meant to be the audacity of Jaguar, he said: “We didn’t have the right products yet, but it did help us get attention, which is a good investment.” Going forward, “you will see communications more on the product, though we won't go away from the brand.” The brand is handled by in-house agency Spark44.

The company, he said, has a four-point brand-building strategy around making the brand desirable (by making it relevant and modern); making the product appealing; focusing on value with competitive pricing, affordability and equipment; and building consumer confidence both with quality and its proxy: warranty and service.

On the product side, the lack of which has been an obvious barrier to the brand's growth, Jaguar is bringing in a compact sedan, XE. Jaguar hasn't had one ever, unless you include the ill-fated Ford Taurus re-skin, the X-Type. The XE is totally new and will compete with the likes of BMW's 3-Series and Audi A4, said Eberhardt. And in addition to updates of the 2016 XF, F-Type and XJ, there will be a first-ever crossover for the brand, the F-PACE.

The XE and F-PACE, which will be 2017 model-year vehicles, can potentially triple Jaguar's U.S. market reach from an estimated 380,000 vehicles this year to 1.2 million, he said.

On the value side, Jaguar will also move toward a new pricing structure. “We will compete in the heart of the luxury market, and we will do it by lowering MSRP, and increase standard equipment,” he said, noting that new pricing for the entry F-Type coupe model-year 2017 will be $61,400, which is lower than current year model.

The XE, which is to be Jaguar’s gateway vehicle, will start at $34,900. Eberhardt said the F-PACE, which will have three trim levels, starts at around $40,000, and the comparably outfitted trim will undercut the Porsche Cayenne in pricing.

On the confidence column, Eberhardt said the brand has introduced Jaguar Elite Care, intended to address people's skittishness about the brand's quality and durability. The 5-year, 60,000-mile warranty includes complementary scheduled maintenance, roadside assistance and telematics service InControl Remote & Protect. “Our current customers are happy with their vehicle vehicle choice. The big challenge has been getting customers to make that choice and get over perceptions from the past, and overcome purchase barriers.”

Eberhardt said part of that strategy is a cultivating a one-to-one relationship with customers. “With retail partners we will be able to provide a bespoke experience tailored to individual customers. Free maintenance is a huge part of that."