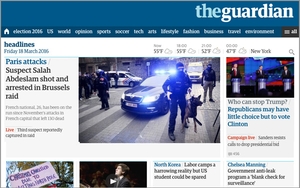 Facing mounting losses, like many of its peers in the newspaper industry, The Guardian is looking to put itself on firm financial footing with a major cost-cutting initiative -- including trimming hundreds of jobs. The UK-based publisher announced that it is trimming 250 positions across the company, including 100 newsroom staff.

The Guardian hopes to achieve all of the planned staff reductions through voluntary severance agreements, but did not rule out layoffs if an insufficient number of employees accept the severance offer. In addition, the company announced that it will not fill 60 positions that are currently vacant, for a total attrition of 310 jobs.

That’s equal to around 18% of The Guardian’s total workforce in the UK and 16% of its global workforce of 1,960. The publisher did not indicate whether any layoffs are planned for any of its overseas properties, which employ a total of 210 staff.

In an email to staff explaining the cuts, Editor in Chief Katharine Viner and CEO David Pemsel stated that a “volatile media environment” left no doubt of an “urgent need for radical action.”

According to the company’s financial statements, the Guardian Media Group will post a total loss of £58.6m or $84.9 million in the fiscal year ending in March. Previously, the company revealed that operating costs have ballooned 23% over the last five years, from £218 million to £268 million ($352 million to $460 million, at contemporary exchange rates).

After blowing through a total £80 million of cash in the last year, the value of the endowment held by the Scott Trust -- the independent charitable foundation that owns The Guardian -- fell from £838 million in July to £735 million ($1.3 billion to $1.1 billion). In January, it announced plans to cut its operating costs by £52 million, with the aim of breaking even within three years.

While its position is hardly ideal, The Guardian is better off than some of its UK counterparts. The Independent has announced that it will cease publishing its print edition on March 26, although it will continue publishing on its Web site and a new app. The move to digital-only publishing will entail an unspecified number of layoffs.