What The Google Guy Said Last Week About Television 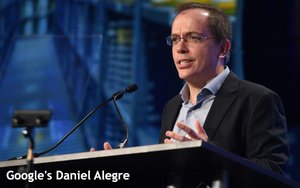 A journalist on the TV beat doesn’t get that many opportunities to come face to face with one of the leading lights of the new media world, so I was intrigued by the chance to attend a keynote speech delivered by Daniel Alegre last week at the National Association of Broadcasters annual convention in Las Vegas.

He is the president of Google. Onstage at the Las Vegas Convention Center last Wednesday morning, he stood at a podium rather than roam the stage wearing a headset microphone, didn’t sport a headset of any kind (that I saw, anyway), and didn’t wear a hoodie or sneakers either. He was, dare I say, respectable.

He never used the word “disrupt” or any of its variations in his speech either. This I know because I paid close attention for this over-used buzzword and never heard it. If Mr. Alegre is intent on disrupting anything or anyone, he kept it to himself. I don’t seem to recall him using the word “passion” or “passionate” either, although I am not quite sure of this.

Instead of resorting to these tired tropes of new-media keynote speeches, Mr. Alegre gave a speech in more or less plain English whose theme was “TV is not dead.” This, of course, runs counter to the so-called conventional wisdom, which holds that TV is dead. Mr. Alegre made this point at the start of his speech when he reported that a Google search of the words TV is dead would produce 338 million results.

I tried this just yesterday and came up with 342 million results. Then I googled the words “TV is dead” within quotation marks and came up with a much more manageable 264,000 results. Maybe I should write Mr. Alegre a letter to suggest to him that a Google search with quotes around the subject matter often yields a much more targeted result. Oh, never mind.

Certainly, Mr. Alegre’s speech was tailored for attendees at the NAB Show, many of whom were from the broadcasting industry -- both TV and radio. As Mr. Alegre undoubtedly figured out beforehand, a “TV is dead” speech would not have played as well with this audience as a “rebirth of TV” speech, which is what his speech turned out to be.

“TV hasn’t really died,” Mr. Alegre said affably. “It’s just completely changed. The TV that you and I grew up with was a box in our parents’ living room. … If you missed a show, it was gone forever.”

This last point was interesting to me. Back in the Television Era -- in which there were only three networks anyone really watched -- it was true: A third of the country would watch a typical prime-time show (very generally speaking), but except for reruns the following summer and then, eventually, in off-network syndication, TV shows were not really seen again. Not like they are today, when all content lives forever on the Internet.

To illustrate his theme that TV is not dead, he listed a number of ways in which it is completely not the same as it used to be. “Times have changed. We all know that,” he said. “Viewing really is dictated now by our social calendars, not by anyone else. The term ‘broadcast’ doesn’t really even apply anymore because most viewing has gone from a group activity to a solo performance,” he said. “Even the tube itself has changed. Now, it’s no longer a tube.” OK, the point is made.

"The biggest change is really the elimination of barriers to viewing," Alegre said. “It’s never been easier to watch what we want, when we want, where we want it. And so, amidst all the doom and gloom about TV dying, a new and better version of TV is rising from the ashes. …  The content is better than ever and there’s so much more of it.”

Hold on there, Mr. Alegre. Yes, there is much more of what you call “content” than there used to be. But is it “better than ever”? That is debatable. Every era of TV has had great shows, amid a sea of bad ones. To me, the same situation prevails today, although others are free to disagree.

What stuns me more is the willingness of people to carry “TV” with them wherever they go and spend so much of their waking hours with their eyes glued to screens both large and small. “There were twice as many scripted dramas in 2015 as there were in 2009,” Mr. Alegre said happily. “Viewership of video is greater than ever as well. Time spent with TV and online video in the U.S. has grown from 165 hours per month in 2012 to 177 hours per month in 2015. TV’s not dead.

“Sure, by the old definition it’s down,” Alegre said of traditional television. “But the new TV, the one that blurs the lines between online and off, is alive and well. TV is truly being reborn.”

I googled “TV is being reborn” and came up with six results.

broadcasting, future of media, tv
4 comments about "What The Google Guy Said Last Week About Television".
Check to receive email when comments are posted.
Read more comments >
Next story loading