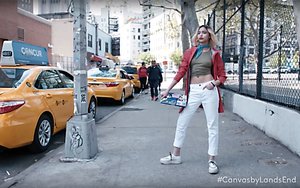 In its ongoing effort to leave its frumpy white-bread roots back in Wisconsin, Lands’ End is introducing the world to its new Canvas collection with a campaign it hopes is both chic and urban.

Lands’ End, which is in the midst of a turnaround engineered by new CEO Federica Marchionni, hired The Sartorialist’ s Scott Schumann to shoot the new campaign, called "Portraits on Canvas." An open casting call gathered stylish New York women, who mix their own clothes with items from the Canvas collection. In addition to print images, there’s also a video, which the company plans to feature on its own Web site and promote through social media channels, using the #CanvasPortraits hashtag.

And it plans to continue the effort with the launch of new clothing each season.

The new campaign is just the latest in a series of moves designed to pump new energy into the struggling brand since spinning off from Sears in 2014, still best known to most Americans for ugly sweaters, school uniforms for kids, and really good customer service. So far, not so good: In its latest quarterly results, revenues dropped to $273.4 million from $299.2 million, and it posted a loss of $5.8 million, compared with net income of $1.7 million in the same period of the previous year.

Marchionni, whose resume includes stints at Dolce & Gabbana as well as Ferrari and who is said to spend just one week a month at the company’s Dodgeville, Wisconsin-based headquarters, said at that time that besides focusing on core business, it was also “launching additional collections that we believe will drive future profitable growth,” including Canvas. “We also enhanced our brand image, including elevated marketing initiatives, the newly launched multi brand e-commerce Web site and refinements to our catalog strategy,” she said in the earnings announcement.

The company has high hopes that reviving Canvas, first introduced back in 2010, can help it earn fashion cred, even while other middle-of-the-road apparel companies, such as the Gap, are struggling. It launched back in April, with the company describing it as “influenced by the freedom of artistic expression,” including a white label meant to symbolize being able “to personally create one's own canvas.”

Earlier this month, it announced another effort to woo younger, hipper customers, with the introduction of Lands’ End Sport, a collection of activewear that includes surf, performance and athleisure clothing for both men and women, much of it keying off the brands’ nautical roots.

Last week it promoted Becky Gebhardt to EVP/CMO; she had been SVP/chief creative officer. And it hired Mike Zhang as VP/E-commerce, digital marketing and innovation.