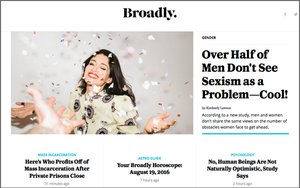 Vice Media site Broadly is losing its founder and editor-in-chief, Tracie Egan Morrissey, just a year after the women’s interest site launched, according to a report from Politico.

Tracie Egan Morrissey has been the the site's editor-in-chief since it debuted in August 2015.

This June, Broadly staffers complained about Morrissey's “aggressive management style and off-color jokes,” according to Politico.

As a result, Morrissey went on a 30-day paid leave from the company. That extended leave trickled into August, and now Vice has informed the Broadly staff that Morrissey will step down as editor-in-chief.

However, she will remain at Vice Media in a yet-to-be-announced capacity.

Broadly was very much Morrissey’s creation.

Ciel Hunter, Vice's head of content, is in charge of finding the next editor-in-chief of Broadly.
management, web sites
Next story loading