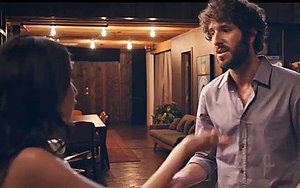 Trojan is continuing its efforts to make condom use — and the conversation around it — less awkward for Millennials, expanding its campaign featuring rapper Lil Dicky.

Two new commercials, which will air during the VMAs on MTV this weekend, feature the rapper with a woman in pre- and post-coital excitement. In the first commercial, Dicky interrupts a makeout session to get a condom.

When his date urges “right here, right now” scattering the papers off his desk, Dicky enumerates the reasons for using a condom and debates the use of the word “Alphabetization,” nearly ending the romantic moment. (A second spot takes place after the action as the couple gets dressed, discussing the peace of mind they have from using a condom and the nature of their fledgling relationship.)

The spots are a continuation of an effort the brand launched earlier this year featuring the rapper known for his radio hit “Save Dat Money.” That earlier effort used long-form digital content of Dicky speaking directly about the importance of safe sex. These new spots are intended to show the rapper modeling the behavior he was previously speaking about, Berez says.

“All of the content featuring Lil Dicky collectively communicates the importance of safe sex and condom usage in a relatable and often humorous way,” Stephanie Berez, group brand manager for Trojan, tells Marketing Daily. “We know that these messages resonate most when influencers are modeling and communicating the behavior in an authentic way, which is why the partnership between Trojan brand condoms and Lil Dicky is so fitting.”

Using MTV and its VMAs as a platform is an important way to reach the young Millennial target, Berez says.

“The VMA broadcast is the most-watched cable awards show and is the most-tweeted program for this target consumer,” she says. “As Trojan continues to normalize the use of condoms and encourage condom compliance, it is essential to be a part of these important and memorable pop culture moments that drive conversation.”