Postmortem On Odd Non-Debate On NBC: So Who Won? 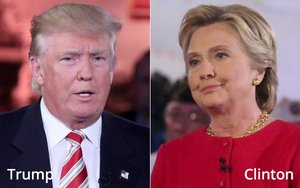 The event was titled the “Commander-In-Chief Forum,” but neither Donald Trump nor Hillary Clinton is commander in chief -- at least not yet.

You might say the not-quite-accurate title underscored this event’s position as not-quite-a-debate. Both presidential candidates were in the building (so to speak -- since this was an aircraft carrier, not a building), but they appeared separately. And it was reasonable to assume that the candidates and their retinues were quartered some distance away from each other too.

Onstage, the candidates answered similar questions on the same topics, and in some of their answers each attacked the other. This one-hour, live show from the Intrepid in New York was seen Wednesday night on NBC from 8 to 9 Eastern, and was simulcast on MSNBC.

The event had a single moderator -- Matt Lauer -- who interviewed each candidate in turn for a few minutes shy of 30 minutes. At the outset of the show, Lauer informed us that the order -- Clinton first and then Trump -- was determined a day earlier by a coin toss.

The subject was national defense and all of its subsets -- military strength, involvement in overseas conflicts, security at home and healthcare for veterans.

A small audience was seated in the space below the ship’s flight deck. They were all U.S. military veterans of various ages and eras representing service in a succession of wars up to and including recent service in Iraq and Afghanistan. Some of the vets were given opportunities to ask the candidates questions.

The event’s title reflected the theme its planners were going for, which was: How can we expect these candidates to comport themselves if they become commander in chief?

So these are the facts. The more difficult task is to try and quantify how each candidate did. Or to put it another way: Who won?

Lauer’s questioning put Clinton on the defensive right away. He spent the first 11 minutes of her portion of the show asking her about her email habits. She gamely tried -- more or less successfully -- to conceal her resentment over this line of questioning, but at the same time, you could sense her frustration.

From her answers, we learned more than we ever knew about the nature and style of classified documents and their letterhead when she described in detail how top-secret documents are clearly identified at the top of the first page (and possibly subsequent pages).

At various times, she resisted Lauer’s attempts to steer her toward a conclusion when her answers became overlong. She talked over him and remained squarely focused on the camera in an effort to address viewers at home. In a minor piece of political theater, she rose from her chair and stood whenever she was addressed by one of the vets in the audience. From this standing position, it seemed easier to ignore Lauer too.

By contrast, Trump never stood. And in comparison to Clinton, he was completely relaxed, never seemed defensive and came across like a man who didn’t have a care in the world. He never raised his voice, listened attentively to the questions from both Lauer and the vets and answered every one of them in a calm, conversational tone.

Neither candidate gave any answers we haven’t heard before. Clinton’s responses to the email questions were the same ones she has adopted recently in which she owns up to making mistakes, and then tries to minimize the damage by describing what classified documents look like.

This strategy seems crafted to demonstrate her familiarity with classified documents, probably to deflect the admission she made in some of her testimony over her emails in which she reportedly admitted she didn’t realize a capital “C” on an email meant it was “classified.”

For his part, much of the post-show coverage emphasized Trump’s comments about Putin in which he praised the Russian autocrat as a “strong leader.” As Trump himself tried to explain at least once, he meant that Putin is a strong leader strictly within the context of the political system in Russia that Trump acknowledged is far different from our own.

The reports on Trump’s statements on Putin largely ignored this nuance, but as Trump seems to fully understand, even if the news media does not: His followers and potential voters understand exactly what he’s saying. It’s why he has come this far.

This non-debate was a preliminary round, of sorts. The first of three real, face-to-face debates takes place Monday, Sept. 26.

politics, tv
4 comments about "Postmortem On Odd Non-Debate On NBC: So Who Won?".
Check to receive email when comments are posted.
Read more comments >
Next story loading