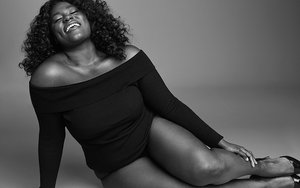 Lane Bryant is aiming its body-positive message straight at the Internet trolls who hate on plus-size women, turning their venom into lighthearted sass.

The plus-size retailer says the new campaign is a natural follow-up to the provocative “I’m no angel” campaign it launched last year, inspired by the body-shaming comments that bullies make about models on social media.

“We wanted to continue the conversation we felt we’d started with last year’s 'I’m no angel' campaign,” says Hans Dorsinville, exec VP and creative director at Laird + Partners, which created the campaign. “And we realized we hadn’t tackled social media shaming directly. On average, most plus-sized women get shamed three times a day in person, and it’s much worse on the Internet. So we wanted to find a lighthearted way to deal with it, using real comments from our models, as well as real insults from their social media postings.”

“Do you see those rolls?” wrote someone about Ashley Graham, the Lane Bryant model who made a huge splash this year as the first plus-size model ever to grace the cover of Sports Illustrated’s swimsuit issue. “Welcome to the bakery, honey,” she says, laughing it off.

“Big is not always beautiful,” sniped another hater about Danielle (Orange Is The New Black) Brooks. “No one should be comfortable in a size 14."

“Have you lost your mind?” she screams back. “I’m comfortable. Big is always beautiful.” And when someone asked Gabourey (Empire, Precious) Sidibe how someone so big can even fit through a door, she shows the bully, with a flirty little pantomime.

As was true with the angels effort, it’s all shot in black and white, with models showing plenty of skin. “It strips away the distractions of fashion and this season’s color and gets right to the character of the woman, and we want people to focus on her body. People are not used to seeing these kinds of bodies, and yet they’re 67% of all women.”

Themed #ThisBody is Made to Shine,” it focuses on social media, since that’s where the controversy is greatest. Plans also call for cinema ads and out-of-home.

The main thing, he insists, is that the campaign is upbeat. “We didn’t want this to be a downer.” When the Internet goes low, he says, “these women go high. They respond to bullying with a lot of control. They don’t let the insults bring them down, and that’s very powerful. These women have big voices, charisma and sassiness.”

While Lane Bryant is one of the biggest brands in the plus-size world, it’s got plenty of competition, including JCPenney’s new line from Ashley Nell Tipton, and Target’s Ava + Viv. Plus-size sales have been gaining steadily in recent years, and while some of that is due to Americans getting heavier, it’s also tied to increasing consumer expectations about clothes that flatter all body types.

The NPD Group, which recently reported that the number of teens buying plus-size clothing has doubled since 2012, says that part of that trend is young women’s demand for a wider variety of clothes and style. Young women believe, the report says, “that plus-size clothing should be offered in the same styles available for all my friends.”