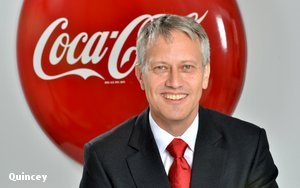 The Coca-Cola Company’s announcement that Muhtar Kent will step down as CEO and be succeeded by James Quincey confirmed a scenario that’s been expected since Quincey was promoted to president and chief operating officer in August 2015.

Quincey, 51, a 20-year Coca-Cola veteran, will take over as CEO on May 1 next year, and stand for nomination as a board director at the company’s annual shareholders’ meeting in April.

Kent, 64, will continue to serve as chairman of the board.

Quincey’s core challenge lies in accelerating Coca-Cola’s diversification beyond its core soda brands in the face of continuing soda sales declines and governmental moves in the U.S. and elsewhere to implement taxes aimed at curbing soda consumption for health reasons.

In public comments accompanying the announcement on Friday, Quincey acknowledged that the company would “like to go faster” in that diversification, although he indicated that he still sees growth opportunities in carbonated beverages.

Coca-Cola credited him with driving the introduction of smaller cans (which enable higher profit margins) and reformulations to reduce added sugar across the brand portfolio — initiatives in part responsible for helping drive positive U.S. sales in recent quarters.

However, the company as a whole has suffered both declining sales and S&P-lagging growth in its share price for several years now.

Quincey acknowledged that making the right strategic choices will require navigating unprecedented consumer and political change. “One thing that’s absolutely certain in the next 10 years is there’s more that we don’t know than we do know, and the world is going to be radically different,’’ he said, reported The Wall Street Journal.

Kent did diversify Coca-Cola’s portfolio during his eight years as CEO, although some maintain not aggressively enough: Soda still accounts for about 70% of the company’s global sales, according to WSJ.

Kent drove the acquisition of Energy Brands (Vitaminwater, Smartwater) prior to becoming CEO, and subsequently led the acquisition of the Honest Tea and Zico coconut water companies, as well as stakes in Keurig Green Mountain Inc, Monster Beverage Corp., and cold-pressed juice maker Suja Life. In 2014, Coca-Coca jumped into dairy beverages with the launch of enhanced-protein, zero-lactose milk brand Fairlife.

Quincey confirmed that he will continue Kent’s initiative to divest the company of its bottling assets (now underway in China, as well as North America) — part of the five-year, $3 billion in cost reductions called for under a plan that Kent implemented in 2014.

Kent significantly expanded Coca-Cola’s global business — and Quincey, who earned a degree in electronic engineering at the University of Liverpool before starting his business career, has also played key roles in contributing to that global growth. He served in the company’s Latin America Group, as president of the Northwest Europe & Nordics Business Unit, and then as president of the Europe Group, which became Coca-Cola’s most profitable group under his leadership. This year, he established a new international operating structure and leadership team designed to make the company “more efficient and effective at the local levels,” according to the company.