Pedigree Gears Up For Puppy Bowl 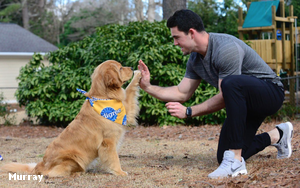 The pet food brand, which is sponsoring the Puppy Bowl XIII, is giving consumers the “full puppy experience” including an inside look at NFL players like Murray and their pups getting into the Puppy Bowl spirit.  The game, which airs from 3 to 5 p.m. Eastern on Feb. 5, will feature an epic matchup between the adoptable puppies on Team Ruff and Team Fluff.

The event serves as a platform for pet adoption and includes a full roster of 78 adoptable puppies from 34 animal shelters and rescue organizations across the U.S. and Puerto Rico.

The Mars Petcare U.S. brand is teaming up with Animal Planet to create and air two videos showing the puppies preparing for the game and what it takes to become a Puppy Bowl champ. "Heart of a Champion" (shown below) features a puppy preparing for the competition.

Rice and Murray gave fans an inside look — via their social media channels — at how their own pups are in training mode with Pedigree.

During the game, Pedigree will sponsor a “Puppy Bowl Virtual Reality” experience offering viewers a chance to check out the action on the field through the eyes of Buttons, one of this year's star puppy players.

“We hope these adorable perspectives of the game will help pique viewers' interests in bringing that puppy experience into their homes by adopting a pup of their own,” said Melodie Bolin, Pedigree brand manager, in a release.