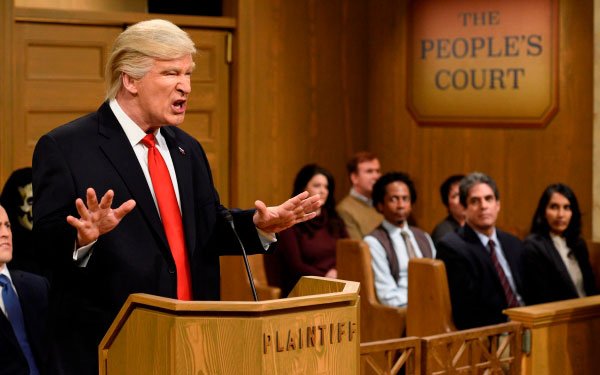 In today's hypersensitive society, Alec Baldwin might appear to be an unlikely candidate for Most Popular Celebrity At the Moment.

And yet, here he is -- actor, cartoon baby voice, Trump impersonator, and by many accounts, a proverbial bull in a China shop.

He’s a guy who steps on toes and cracks eggs. But you know what they say: You gotta crack a few eggs to make an omelette.

And in the breakfast buffet line that is show business, busy Alec has been manning the omelette station 24/7. Where does he find the time?

Here's the latest on Alec:

By virtue of his nearly weekly appearances on “Saturday Night Live” (photo above), he has taken over the world as TV’s Trump Impersonator in Chief (although Comedy Central will try and dethrone him with an entire show starring a Trump impersonator that premieres Thursday night).

He’s the voice of the titular tot in the animated movie “Boss Baby,” which has reportedly taken in more than $138 million in ticket sales since its release on March 31.

He’s even hosting a game show -- “The Match Game” on ABC. Is there anything Alec Baldwin can’t (or won’t) do?

Born during the administration of President Dwight D. Eisenhower, Baldwin is 59. But thanks to cool friends such as Tina Fey (who cast him on “30 Rock”) and Lorne Michaels (who’s no spring chicken himself), today Alec is a celebrity who appeals to all age groups, even babies.

And he's not even that nice (or so it seems). He has made headlines over the years for his abuse of photographers, for example -- in one incident questioning one photographer’s masculinity and/or sexual orientation. Of course, celebrity photographers aren’t very nice either.

Baldwin famously called his own daughter a pig in a phone call that was recorded and somehow made its way into the public realm. To his credit, he has been expressing his regret for the incident ever since.

He makes movies constantly, won Emmys for “30 Rock” and even seems to be enjoying a pleasant domestic life with wife Hilaria, which is an interesting name. I wonder if she has a sense of humor?

The man is nothing if not intense. A few years ago (maybe five or possibly as long ago as eight), my wife and I spied Alec eating dinner alone at a popular Chinese restaurant on Manhattan's Upper West Side.

If memory serves, he downed a plate of noodles in about 15 minutes, while also taking multiple phone calls. I think he may have been working two cell phones too. (Forgive me for being unsure of these details, for we were sitting some distance away.)

Let the record show that the TV Blog has no beef with Alec Baldwin, having enjoyed his work in movies and TV shows for years. Among the highlights were his frequent appearances on CBS' “Late Show with David Letterman.” Outspoken and entertaining, Baldwin was one of the best guests of the Letterman era.

Not that Alec has much spare time these days, but might his omnipresent popularity translate into commercial-endorsement work for him? He starred for several years in the Capital One “What's in your wallet?” commercials. But Jennifer Garner took them over some time ago.

What was it that Woody Allen said about success? Something like “80 percent of being successful is just showing up” (various Internet sources are at odds about the exact wording of this). Well, Alec shows up. Then he does the job.

Next up for Alec: He will soon be taking over as host of the movie series on TCM called “The Essentials,” which he once co-hosted with the late Robert Osborne. I ask again: Where does he find the time?

Well, you know what they say: If you want something done, give it to a busy man.