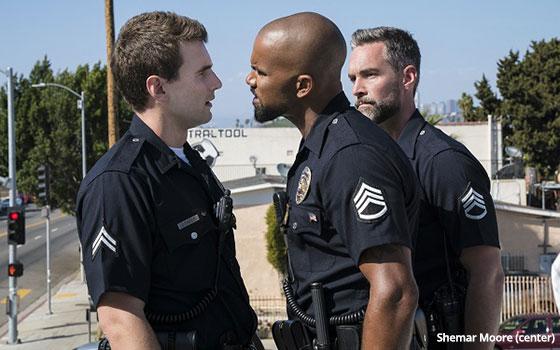 A new S.W.A.T. team swaggers onto TV this week as CBS returns to regular programming this Thursday night.

This two hours of sitcom hilarity sets the stage for the new “S.W.A.T.” at 10 p.m. -- a super-serious, macho cop show that has nothing in common with its four half-hour lead-in shows.

Yes, there was already a “S.W.A.T.” TV series back in 1975 and a “S.W.A.T.” movie in 2003. In addition, teams of S.W.A.T. (special weapons and tactics) personnel have been featured on dozens of cop shows, so there is nothing particularly new about a one-hour drama about a S.W.A.T. team.

The original series was so long ago that few people today will likely care or wonder whether the new version bears any similarity to the first one.

Unless I have missed a bunch of details, there is nothing in particular that is similar between them, although the premiere episode -- which CBS provided for preview -- ends with the original show's theme song.

The star of the new “S.W.A.T” is Shemar Moore (photo, center), but it's really an ensemble drama made up of the members of at least two fictional LAPD S.W.A.T. teams.

Naturally, the two are rivalrous, in that broad-shouldered way in which TV shows of this type customarily portray men.

In the series premiere, the S.W.A.T. teams are on the trail of a group of men who are fomenting racial tensions following the accidental shooting of a black youth by one of the S.W.A.T. team members while he was in pursuit of a gang of bad guys.

In this way, the new “S.W.A.T.” exploits the racial tensions over police shootings that have made headlines the last few years.

The show purports to be about these racial tensions, which is one of the reasons why the Shemar Moore character -- an African-American who is himself from the ’hood -- is promoted in the series premiere to commander of the S.W.A.T. unit involved in the accidental shooting.

With its focus on race relations, “S.W.A.T.” evidently aspires to be something more than just another “acronym procedural” on the CBS lineup -- like the “NCISes” and “CSIs.”

But in many ways, it's a show assembled and produced within the CBS formula. In much the same way that the network's ensemble dramas feature groups of crime fighters who are all geniuses (a type described in innumerable past TV Blogs), “S.W.A.T.” presents its macho heroes as the best, most professional and committed police officers who ever obtained the privilege of wearing their uniforms.

As also mentioned occasionally in previous reviews of CBS shows of this type, the new “S.W.A.T.” is nothing if not proficient, and by extension, critic-proof. Or to put it another way, critics (myself included) never seem to lavish effusive praise on these CBS shows, but for some reason, regular people seem to like them.

And if “S.W.A.T.” is formulaic (which it is), you can hardly blame CBS, with its track record of prime-time hits, to deviate from a formula that seems to work time and time again.