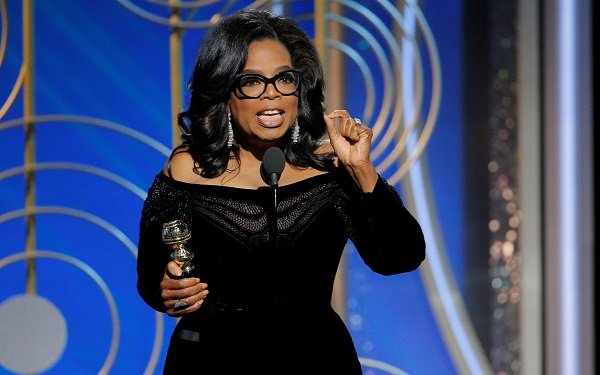 If the emphasis at Sunday night's Golden Globes on NBC was on worthy causes such as blowing the whistle on sex harassment and advocating for gender pay equality, then why did I find it so difficult to sit through?

Maybe it's the same old problem I have whenever these movie and TV awards shows devolve into a platform for the rich and fabulous to complain about life's unfairness.

I have no doubt that the speeches were well-meaning, in the sense that the sentiments expressed were sincere -- at least mostly.

But my cynical side -- which has been developed over more than three decades of interaction with the show business publicity apparatus -- has me thinking that the preponderance of #MeToo and #TimesUp speeches at the Golden Globes had something to do, at least in part, with everybody making their best effort to adhere to the evening's prevailing narrative or risk negative consequences later on social media.

In other words, it wasn't enough for the winners to just graciously thank the Hollywood Foreign Press Association and their colleagues and co-stars for making this award possible.

Instead, the vast majority of the acceptance speeches went from mere thank yous to orations about civil rights, as if Nicole Kidman and Reese Witherspoon were now to be considered on par with Rosa Parks.

Meanwhile, I'm watching this awards show and I am thinking: Women fighting back against sexual harassers -- and worse, sexual attackers -- is all fine and good.

But at the same time, these people at the Golden Globes are all participants in an industry in which much of what is produced celebrates anti-social behaviors, including the objectification of women by men.

So when I see these stars getting on their high horses about the behavior of some of their industry colleagues (behavior which was known about for years in many cases), I usually have a “what is wrong with this picture?” reaction.

For example, at least some of the Golden Globe nominees and winners were honored for work that was grotesque.

Ewan McGregor's win for Best Actor in a TV Drama (Limited Series) for “Fargo” was a case in point. The show's third season, in which McGregor played two brothers, was a meaningless exercise in straight-up bloodletting that celebrated violence. It was an ugly show in many ways -- which in Hollywood translates into top honors at awards time.

Hollywood celebrities are so blasé about the violence and antisocial behavior they depict in their TV shows that it's common to hear them discuss how “dark” their shows are, as if this is something to be admired.

Jessica Biel did this in one of the pre-Golden Globe, red carpet interviews I caught before the awards show Sunday night.

She was nominated for her USA Network series called “The Sinner.” On the red carpet, she talked blithely about how interesting it was to play such as “dark” character -- in her case, a woman who for no visible reason suddenly went berserk on a well-populated beach in the middle of a day and repeatedly stabbed some poor unsuspecting soul to death.

For this “entertainment,” she was nominated for a Golden Globe award. I don't mean to pick on Jessica Biel. She seems like a nice young woman.

But it sometimes comes across as sanctimonious when show business types preach to the rest of us about society's shortcomings when the industries -- movies, TV and music -- that they are in profit from these very same flaws.

On the other hand, Hollywood does sometimes come through with well-meaning productions that break through the asinine violence and sexism that characterizes so much Hollywood product -- a movie such as 2013's “Ten Years a Slave,” just to name one.

For example, having seen “Lady Bird” just recently, it was gratifying to see such a great movie -- one that depicts contemporary life so accurately, warts and all -- win two key Golden Globe awards (although its inclusion in the “comedy movie” category defied logic).

At the same time, “Three Billboards Outside Ebbing, Missouri” won four Golden Globes for its story about an angry mother who turns to violent crime herself when she perceives that the local police department isn't doing enough to solve the murder of her teenage daughter.

In the movie, the woman torches the police department and severely burns one of the police officers (a guy whose behavior was so bad throughout the movie that you are supposed to think he deserved it).

On Monday morning, NBC put out a press release reporting that more than 19 million people watched the Golden Globes. And there was certainly ample chatter about it on social media that may have reached a crescendo with Oprah Winfrey's speech about civil and human rights after she was awarded the Hollywood Foreign Press Association's Cecil B. DeMille Award for lifetime achievement (photo above).

From a programming and ratings standpoint, this three-hour awards show and protest rally was a huge success -- notwithstanding the ravings of a TV critic on the morning after.