America Tunes In For Stormy Interview On '60 Minutes' 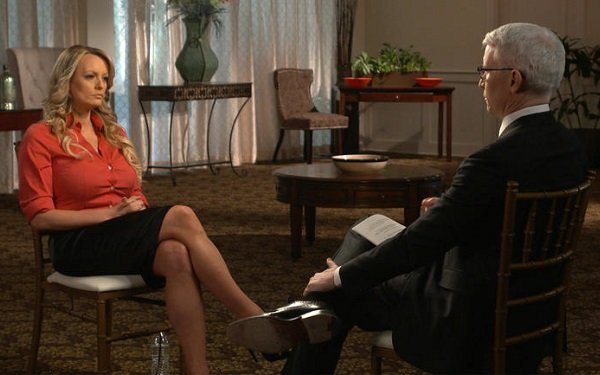 Among the revelations learned in Anderson Cooper's interview with Stormy Daniels on “60 Minutes” on Sunday was the playful tale of how Ms. Daniels allegedly spanked Donald Trump with a rolled-up copy of his self-named magazine.

This was in 2006 in the hotel-suite tryst that Trump and/or various representatives allegedly paid Daniels to keep quiet about 10 years later, just days before Trump's victorious presidential election in November 2016.

The other big revelation was Daniels' account of a veiled threat made to her by an unidentified man in a Las Vegas parking lot. In this story, a man advised her to be quiet about her affair with Trump. The man then made a comment about Daniels' young daughter, who was seated in Daniels' car, which she took as a threat against her child.

Later on Sunday evening, a local TV station in New York covered the story from a bar in Greenwich Village, where a crowd of neighborhood residents and barflies had gathered specifically to watch the interview together.

Seen on the newscast that evening, the bar patrons were gleeful, and probably more than a little lubricated by the time this local reporter and her crew showed up.

There was even a do-good element to the proceedings. Some kind of collection was being taken up for the benefit of sex workers, according to one of the organizers.

It was another media night in America. A high-profile journalist scores a prime-time exclusive with a salacious newsmaker and the inevitable results were high ratings for CBS (an estimated 22 million people watched, according to the overnights) and robust sales at a local tavern.

Armchair commentary was also inevitable. Was Stormy believable? Was this interview newsworthy? Did Anderson Cooper demean himself by taking the lead on this one?

On that last question, you cannot blame a journalist for taking up an exclusive interview when it falls in his lap, even if the subject matter stinks to high heaven.

Besides, the President of the United States bears more responsibility than Anderson Cooper for lowering the level of public discourse, given the way in which he has (allegedly) comported his life.

The life of Donald Trump before he became president (and, some would argue, after) calls the newsworthiness of this interview into question.

Cooper and his producers at “60 Minutes” handled the material with as much class as they could, given the challenges presented by various tidbits, such as the rolled-up magazine spanking.

They surrounded the interview with context, too. The segment was long, and Daniels was seen in just a portion of it.

Other elements of the segment included interview portions with Daniels' attorney, Michael Avenatti. The role of Trump's attorney, Michael Cohen, in the payoff and cover-up was also closely examined. Cohen, who refused to be interviewed, came across as a shadowy figure.

In the end, the Greenwich Village bar patrons seemed well-satisfied with what they had seen.