Is It Time To Rethink What We Call News? 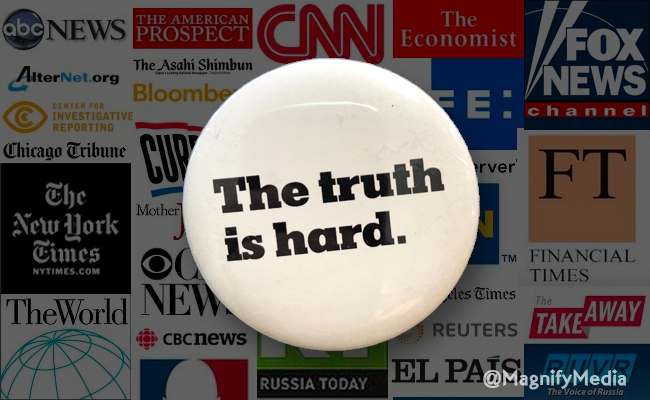 The New York Times has a new marketing campaign: "The truth is more important now than ever."

Let’s start by leaving Donald Trump out of the equation. Certainly the emergence of the Presidential Tweet and the use of the phrase “fake news” indiscriminately to tarnish anything that he disagrees with complicates the matter. But the current news economy was facing a crisis and a crossroad long before Trump.

Here are five ways news can be reimagined:

1. Who speaks? Until very recently, the people who had access to the tools of news publishing and distribution were the monied elite. Newspapers, radio and television were all owned by an elite class of privileged publishers and broadcasters.

This isn’t to say the media was inherently owned by a single political ideology. Journalists are more liberal that conservative on a 5:1 basis (as reported by the Pew Research Center), but media organizations that reach Americans are more politically balanced.

For example, Rupert Murdock’s Fox News, the Wall Street Journal, and The New York Post are clearly conservative, along with Sinclair Broadcasting, which is buying Tribune and will own 233 local TV stations. Breitbart and The Drudge Report have significant capitalization and footprints.

But the internet has removed the barrier to entry. Today, anyone with an internet connection and a keyboard can be a publisher. And while early internet innovators saw the democratization of publishing as an inherently good thing, the combination of an open publishing platform and the rapid shift from desktop to mobile consumption has had some dramatic and unanticipated consequences. Mobile reading (and viewing) has shortened the length of shared media.

In the new world of unfiltered media, the most outrageous and controversial voices are able to rise above the crowd. The democratization of publishing has created a bit of an arms race, with ideas and voices that used to operate at the fringes getting a disproportionate amount of attention.

2. What are facts? In the debate over fake news, critics have retreated to their corners and called on each other just to present “the facts.”

But those of us who work on the front lines know how complicated that can be. It turns out numbers are hard to come by and harder to agree on.

How many people attended Donald Trump’s inauguration? It depends on whom you ask. There’s good science on how to count crowds from pictures shot from the air, but no federal government organization like the National Parks Service wants to get caught publishing facts that don’t align with what the President claimed. So the facts are replaced by estimates, which vary widely.

We’re living in an era of alternative facts, which is probably better. As long as every bit of information is being classified as having a political bias or POV, there’s no likely way we’re ever going to return to the pre-internet days of authoritative news sources gathering and publishing facts without being drawn into a battle of the source, accuracy, or impartiality of facts.

Instead, we’ve arrived at a time when news organizations are going to have to be more transparent about their point of view, internal biases, and underlying beliefs.

Honest institutional positions will giver readers/viewers a framework. Exploring a complicated news story by reading The New York Times, Reuters, and The Wall Street Journal will provide an informed citizenry with a diversity of perspectives, and the opportunity to come to their own conclusions.

3. What is opinion? In an era where authenticity beats authority, it’s hard to ask journalists to be both objective and opinionated.

Defenders of Fox News go out of their way to say that Fox’s news programs are produced with journalistic ethics, claiming  that Fox’s opinion programing is what brings critics, who suggest that shows like “Hannity" blur the line between fact and fiction.

It will be up to publishers to clarify the rules of the road and how they define label news and opinion. Even as opinion gives more personal latitude to pundits and commentators, the value of opinion allows news organizations to slide down the slope of “both sides,” where any story has someone willing to take the opposing view.

Does climate change have a scientific basis to be denied? By any reasonable measure, no. But in the world of endless opinion, a cable news producer can always find someone to say that climate change — or more broadly, “science” — is biased and should be ignored.

We need strong, well-argued voices on the opinion pages, But choosing the most controversial or vociferous comments takes us down a path from thoughtful signal to overwhelming noise.

4. Who curates — and why? At this year’s SXSW, Apple’s Eddy Cue gave a talk on "Curation in Media: Why It Matters.” Cue is Apple’s senior vice president of internet software and service, and what he had to say about news was important.

“The key is to bring great articles from trusted sources. It’s about curation,” he noted.

"We want the best articles, we want them to look amazing, and we want them to be from trusted sources so that we don’t have a lot of the issues that have been going around in the marketplace,” said Cue, with a not-very-veiled reference to the fake news issues that Facebook and YouTube are addressing.

So, while Facebook, YouTube, Twitter and others work to serve advertisers who still pay for mass audience, Apple instead looks to curate for quality -- and to build revenues from the sale of hardware and subscription media. This model wins as consumers find themselves hungry for clarity and focus, not the firehose spew of unfiltered noise.

Can Apple bring subscription revenue to publishers? The company’s recent purchase of Texture, a magazine subscription curator, suggests Apple’s interest in building revenue from quality content subscriptions is only going to grow.

5. Economics: You get what you pay for.  News has been handicapped by being the free content that attracts audience, then is sold to advertisers. Advertisers buy ads to sell their products, so we can’t expect them to want to have their messages next to stories that are inherently disturbing. Read about children dying in Syria, and then book a luxury vacation? Not likely.

Yet readers and viewers are interested in serious, often complicated stories about the world we live in and the lives we lead. Which is why subscriptions are growing at the Washington Post, the New York Times, and a slew of other quality journalism offerings. There’s also a trend for a new generation of high-quality, focused journalism efforts to put more of their content behind a paywall.

Journalism isn’t going back to the days of limited bandwidth and publishers whose economic strength gave them the power to publish. The genie is out of the bottle. The tools to make media have been democratized.

Now readers and viewers need to vote with more than their clicks and attention. We’re ready for new media models to emerge. It’s time to support the voices and institutions we want to survive and thrive.

So vote with your credit card, both for big sites and small ones. Every dollar has the power to grow a new generation of solid, passionate, serious journalists.

We need them now more than ever.