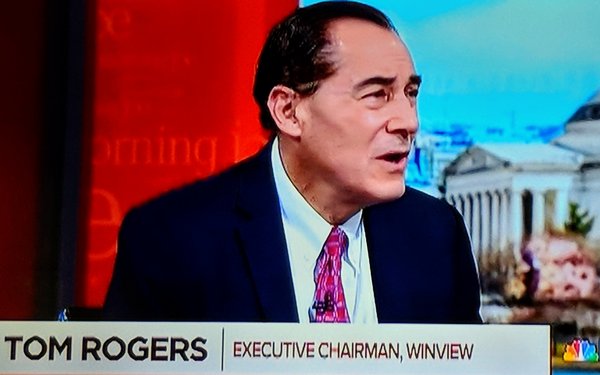 Tom Rogers, who as head of NBC Cable ushered in the era of vertical news channels that have contributed to the political polarization of news programming and audiences, this morning used one of his progeny -- MSNBC -- to call out the media industry for failing to defend threats to their First Amendment rights from the Trump Administration.

“I think the entire media industry has to be called out here,” said Rogers, now executive chairman of WinView, on a segment of MSNBC’s “Morning Joe” that began by discussing a new wave of Russian disinformation attacks on digital media platforms like Facebook, Twitter, Google, Reddit, Tumblr, 4Chan, etc., implying that mainstream news media outlets are equally as complicit in their negligence, or maybe even worse.

“We’ve talked a lot about Republican enablers here but we’ve got trade associations in Washington -- National Association of Broadcasters, [National] Cable Television Association, the News Media Council that represents national newspapers, the internet association that represents internet companies -- these are advocacy trade organizations, incredibly well-funded and the product of the industry they represent is being damaged everyday by a President who is trying to delegitimize them.

Citing a recent poll that only 11% of Republicans believe news from mainstream media outlets, Rogers said the delegitimization of news media is beginning to impact independent voters as well.

Rogers seemed dumbfounded, if no apoplectic about the media industry’s failure to counter the attacks being made by the White House, and especially by President Donald Trump in his tweets, campaign rallies and other public statements.

That Rogers is the one blowing the whistle is a little ironic, given that he may be the person most responsible for the niching of the U.S. news marketplace. As head of NBC Cable, he created CNBC, then spawned America’s Talking, a short-lived national cable TV channel that gave rise to Roger Ailes, who left to start the Fox News Channel. America’s Talking was then rebooted as MSNBC.

Rogers was prescient in understanding the appetite the American public has for vertical -- even niche point-of-view journalism -- after NBC he ran special interest journalism publisher Primedia, and then moved on to the most niche form of programming of all, serving as CEO of personalized media platform TiVo, before forming WinView.

What Rogers may not have seen back then, was the unintended consequences unleashing niche news would have on polarizing America’s consensus view of information, values and, yes, even truth. We’ve come a long way since “The Powers That Be,” when a handful of powerful, centrist, mainstream news organizations set the baseline of U.S. sensibility. And digital hyper-fragmentation is just the latest manifestation of that.

Leading into Rogers was a segment with Laura Rosenberger, director of the Alliance For Securing Democracy, who testified before the Senate Select Committee on Intelligence on "Foreign Influence Operations and their use of Social Media” on Wednesday about a new wave of Russian disinformation attacks on America via a wide variety of social media platforms (see embedded video below).

While most of the attention has been on Facebook, Rosenberger noted that Russian active measures to spread disinformation are present on Google, YouTube, Twitter, Reddit, Tumblr, 4Chan and other platforms. She also indicated that Russian operatives are utilizing search optimization techniques to move their disinformation up search result rankings, though she didn’t say whether they were organic, paid or a combination.

Rogers concurred that the focus should not just be on Facebook, which has become the poster child for Russia’s active measures, and whose stock recently took a major hit related to that.

“I think the answer is that they like the deregulation stuff that they’re getting a piece of too,” Rogers said about the media industry’s tepid response to Trump’s attacks. “And trade associations don’t want to rock the boat, because they’re getting their piece, whether it’s Net Neutrality or ownership limits being relaxed.”

Rogers implied that the short-term gains in regulatory action might not be worth the long-term impact on the delegitimization of their product.

“The product of the entire media industry is being debased, degraded, tainted, and the person who is now calling for the death of the traditional media industry by the end of his presidency is not being countered in any systematic way by the very industry whose product is being taken down by this. And I don’t get that,” he said.