New For Fall: Despite 'Million' Flaws, Show Is OK Anyway 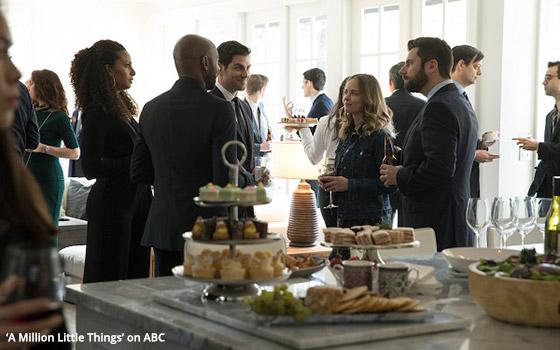 Maybe I’m becoming soft in my old age, but even though this new drama on ABC called “A Million Little Things” has a million little flaws, I liked it anyway.

The premiere episode, airing Wednesday night, is chock full of cringeworthy moments. I happen to love the great ’60s song called “Both Sides Now,” but hearing two versions of it in one episode -- neither sung by Judy Collins -- had me rolling my eyes and groaning out loud while previewing the series pilot.

In addition, a funeral scene in Episode One seemed to be an unfortunate way to usher in a new drama series -- signaling to all who would sample this show that it intends to be a one-hour downer of a TV-viewing experience every week.

Of course, a memorial service such as the one seen in the first episode of “A Million Little Things” is inevitable if one of the show’s principal characters decides to commit suicide.

This unfortunate occurrence provides the basis for the entire series, which tells the story of this group of friends both before and after the untimely death of their friend, who seemed to have everything going for him.

As the show unfolds, the friends are seen enjoying each other’s company at events such as Boston Bruins hockey games and at the catered reception following their friend’s funeral (this reception and its yummy pastry selection is pictured above).

During one conversation in which the friends talk incessantly about their lives, the talk turns to the subject of John F. Kennedy Jr.’s death in that plane crash in July 1999.

The conversation seemed to imply that for their generation, the death of JFK Jr. possesses qualities for them that are similar to the way the assassination of Jr.’s father in 1963 resonates with an older generation. I don’t really know how to react to this.

The title of “A Million Little Things” is derived from something someone supposedly wrote or said about friendship -- that it is made up of a “a million little things” that help to draw certain people into friendly, lasting relations with each other.

In this show, there seem to “a million little things” that these close friends are keeping secret from each other.

It’s an “everybody’s got a secret” drama, which is a characteristic common to other dramas seen in recent seasons on ABC -- from “Scandal” to “How To Get Away With Murder.”

Much of “A Million Little Things” seemed clichéd, irredeemably sad, and at various points, predictable.

And yet, there was something about this show that kept me interested enough in these characters for me to actually watch Episode Two -- something I rarely make time to do when previewing a TV show for review.