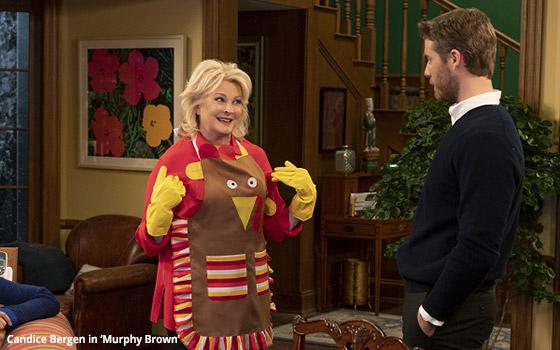 What were the worst new shows of 2018? Well, that's always a matter of personal taste, and in the case of this TV Blog, the taste happens to be mine.

So instead of calling this end-of-year blog “the worst” new shows of the year, perhaps we can more accurately cite them for receiving the year's worst reviews here.

The following shows are not necessarily laid down here in any real order of their “worst-ness,” although “Murphy Brown” might rightfully assume the position of worst among equals.

This revival was the most highly anticipated network series of the year, but when it finally arrived this past fall, it was beset with cobwebs.

It was listless, old hat and irrelevant. One gets the feeling it was a Moonves-era project, which means the odds do not favor the new “Murphy” making it to a second season. The headline on our review was “Pain Redefined.”

Speaking of pain, a number of new comedies fit into the “painful to watch” category this past year. These included "I Feel Bad," "Champions" and "AP Bio" on NBC, and "Let's Get Physical" on the Pop Network.

"In 'I Feel Bad,' the narration is among the worst ever heard in a network sitcom," our review said. "AP Bio" was "a complete waste of time" and "Champions" was an "eye-rolling waste of time."

The headline on our “Let's Get Physical” review was "Pop 'Physical' Fitness Comedy Is Exercise In Tastelessness." The show was awful.

New dramas fared much better in our reviews than comedies, although there were a handful of drama pans.

His character, a Montana ranch patriarch, was so laconic that he was almost comatose. For reasons I will never understand, the show emerged as a hit for Paramount, regardless of how the TV Blog felt about it (a common occurrence).

Also faring badly among dramas was “Good Girls,” NBC's ode to female empowerment that had three put-upon women wreaking havoc on their communities when they turned to violent crime to right various wrongs committed by men.

Given the awful gun violence that plagues this country -- particularly, but not limited to, 2018 -- “Good Girls” played tastelessly like a screed in favor of using guns to settle disputes, both real and imagined. The TV Blog's thumb was pointed way down on this worthless piece of junk.

The show starred Amy Adams, with support from Patricia Clarkson, but the subject matter -- the disappearance (and probable murder) of a preteen girl -- was relentlessly sad and depressing.

These traits are so common in TV shows today that the entire activity of watching TV threatens to plunge one into a deep depression.

In the reality-TV arena, a number of shows emerged as worthy candidates for our “worst” list.

These included the wholly unbelievable “Seatbelt Psychic” on Lifetime, in which a cab driver revealed to his trapped passengers that he is a medium in contact at that very moment with one of their dead relatives whose spirit happens to be sitting right beside them. The show was ridiculous -- more like a parody of a reality show than a real one.

Even worse was the ABC competition show called “Castaways” that seemed wholly ripped off from “Survivor” on CBS. A big difference between the two: Each one-hour episode of “Castaways” felt so long that it was like being stranded on a deserted island with nothing to do with people you can't stand.

And the worst reality TV show of 2018? This was the show called “The Secret Life of Kids” on USA Network in which supposedly “hidden” cameras caught a community of kindergartners in the act of being themselves.

The result was a show characterized by baby talk that was so unintelligible that the show needed subtitles. Moreover, this contrived, nature documentary-style of filming the behavior of children for the entertainment or edification of others, as if these children were little more than chimps or snow monkeys, was demeaning to everyone involved, including those watching at home (if there were any such people).\