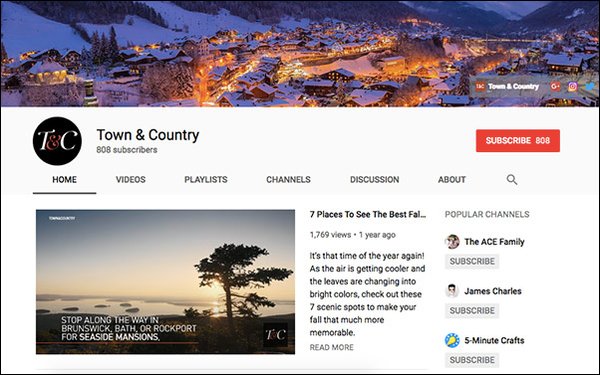 Four of the magazine brands that experienced over 300% video viewership growth year-over-year in the Magazine Media 360° Brand Audience Report for September 2018 were Hearst brands: Esquire, Elle, Cosmopolitan and Seventeen.

In the October MPA report, about half the titles with the most video growth year-over-year were also Hearst brands.

A Hearst spokesperson told Publishers Daily that Hearst Magazines began to focus its video efforts on YouTube in the summer of 2017.

While Hearst was successfully publishing videos to Facebook and had developed a few shows for Facebook Watch, most of its magazine brands had not yet made explicit efforts around YouTube, except for Seventeen.

The goal this past year was to grow its YouTube audiences and create more IP. Concentrating on YouTube helped focus Hearst's efforts on building momentum on the platform.

Hearst teams developed a slate of series across three brands in particular: Harper’s Bazaar, Elle and Seventeen. Two of those titles were on the list of magazine brands that had experienced over 300% viewership growth year-over-year, out of the 112 magazine brands included in MPA's report.

Harper's Bazaar and Elle each have over a half million YouTube subscribers, with popular video franchises like "Waking Up With..." and "Go To Bed With Me," which feature the morning and nighttime routines of pop culture figures.

At Hearst, the culture around video production changed around the summer of 2017 as well: video became part of every idea at the publisher. The Hearst spokesperson added the company tried out lots of series.

The brands used what they learning in their successes and failures to adapt their ideas and video output — all at a rapid pace.

2018 was the year many publishers moved to “pivot to video.” But a number of video-first publishers, like Vice and Mic, struggled, or nearly completely shut down.

How did Hearst continue to grow its video audiences, when more magazine brands were competing for audiences’ attention? The spokesperson said Hearst Magazines’ video and editorial teams work hand-in-hand to develop ideas for both video and text formats.

Series that launched in 2018 may have additional content created around it or spun off from it next year, according to the spokesperson. That will likely mean a combination of serial video, and timely, quick-hit video.