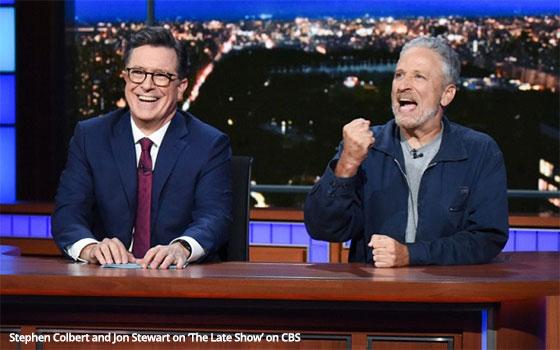 In order to persuade Senate Majority Leader Mitch McConnell to try and get members of the Senate to move faster on a bill extending medical funding for 9/11 first responders, Stephen Colbert called the senator a dick and Jon Stewart called him a turtle.

This, in a nutshell, is what passes for political discourse on television in the year 2019.

The name-calling took place Monday night on Colbert's “Late Show” on CBS, where Stewart made a surprise appearance -- literally materializing from beneath Colbert's desk.

Colbert had just raised the subject of the tit for tat in which Stewart and Sen. McConnell had been engaged for several days in separate media appearances, ever since Stewart angrily scolded lawmakers at a Senate hearing last week.

Stewart is active in speaking out on behalf of first responders who toiled in the smoking wreckage of the World Trade Center in New York in the aftermath of the terrorist attacks on Sept. 11, 2001.

In recent days, Stewart has been complaining in various TV appearances that the Senate, under McConnell's leadership, is moving slowly on approving a bill to continue funding that would pay the medical bills for the first responders who have contracted serious illnesses -- including cancer -- from exposure to the toxins in the air and ground at the WTC site.

Stewart is accusing McConnell of using the bill as political leverage to pass other, unrelated legislation. Stewart feels it is wrong to use this particular bill for political purposes since it funds medical care for people who risked their lives to search for human remains at Ground Zero.

For his part, McConnell said on Fox News this past Sunday that he does not understand why Stewart is “bent out of shape.” McConnell conceded the process might be slower than Stewart wants it to be, but the majority leader also surmised that the bill's passage would occur in time for the medical funding to continue.

And yet, Stewart, aided and abetted by Colbert, continued to hammer McConnell on “The Late Show” Monday night. The segment can be seen here.

Colbert introduced the segment by showing a clip of Stewart -- who was also interviewed on Fox News Channel on Sunday -- referring to McConnell as a “white whale.”

Colbert then applied the phrase to his own comment on the situation. “Yes, Mitch McConnell is the white whale,” said Colbert, 55, “because he has been acting like a huge Moby Dick!” Naturally, the studio audience erupted in laughter.

A few moments later, Stewart appeared from his hiding place behind Colbert's desk and the studio audience gave him a standing ovation. Stewart, 56, then ranted about McConnell, and among other things, gave the opinion that McConnell's physical appearance bears a resemblance to a turtle.

The studio audience loved this too. The TV Blog supposes that there is something about a couple of old guys making jokes like teenagers that really seems to play well with today's late-night audiences.