New Show With Unwieldy Title Is Winner For Showtime 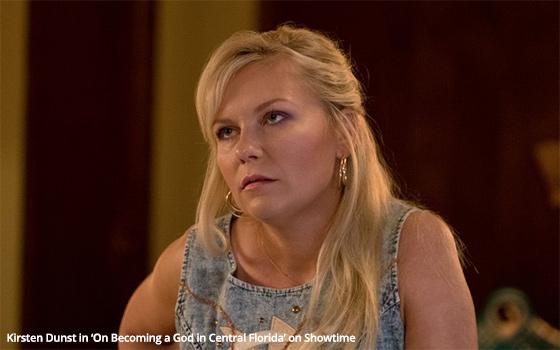 Awkward title, great show. That just about sums up the TV Blog's initial reaction to this new Showtime series called “On Becoming a God in Central Florida.”

And since initial reactions are often the best and most honest reactions from which to build a review of a TV show, this show -- which premieres this coming weekend -- looks like a winner for Showtime.

While the title smacks of pretentiousness, the show itself does not. It is about typical middle-class Americans and the struggles many people have when it comes to making ends meet.

At the center of this affecting drama is a young mom named Krystal Stubbs, who works at a local water park in central Florida -- a region identified in the show as “Orlando-adjacent.” Her husband Travis sells insurance, but he possesses an obsessive yearning to become a millionaire.

The time frame is 1992, and Travis comes under the spell of a self-help motivational guru who offers promises of great wealth while marketing CDs and audiocassettes of his motivational sermons to gullible middle Americans like Travis.

This guru's get-rich plan requires that men and women sign up to sell his company's line of generic household products. In the show, the only person who seems to be getting rich is the guru, a man named Obie Garbeau II.

He is played to perfection by Ted Levine. Alexander Skarsgård plays Travis Stubbs, and Kirsten Dunst plays Krystal. Her portrayal of this earnest but tough young woman is one of the year's best performances on TV.

Showtime's publicity material is positioning “On Becoming a God in Central Florida” as a timely (i.e., relevant to the world of 2019) tale of female empowerment. The show might be all that, but it can also be enjoyed simply for its storytelling, its collection of colorful characters and its performances. The rest of this show's fine cast provides very strong support for Dunst.

Perhaps the only thing difficult to remember about this show is its unwieldy title. It is difficult to imagine anyone asking a friend, “Hey, did you happen to catch ‘On Becoming a God in Central Florida’ the other day?”

This show's initial season is nine episodes long. Who or what becomes a god in central Florida is not made clear in the first two episodes the TV Blog previewed for this review. Who knows? Perhaps the god in the title will turn out to be a goddess.

“On Becoming a God in Central Florida” premieres Sunday night (August 25) at 10 Eastern on Showtime.

television
1 comment about "New Show With Unwieldy Title Is Winner For Showtime".
Check to receive email when comments are posted.
Next story loading