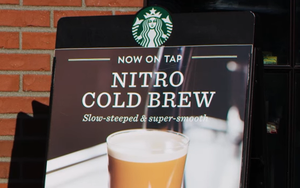 Nitro Cold Brew coffee and other cold beverages — with shots of loyalty and technology added in — are keeping things perking at Starbucks and its more than 31,000 stores worldwide. In the United States, the company posted comparable-store sales growth of 6% in its recently ended fourth quarter, the best performance in more than two years.

Led by strength in its cold offerings, including the new Pumpkin Cream Cold Brew, Starbucks beverages represented 5% of the 6% sales increase, with the remainder attributed to food.

The Nitro Cold Brew platform, supported for the first time by national advertising in August, “continued to be well received, drawing more occasional customers and slightly favoring the afternoon daypart,” Starbucks chief financial officer Pat Grismer said last week on a conference call with investors. Nitro Cold Brew is a variation of the company’s cold brew that is infused with nitrogen as it pours from the tap.

Early in its third quarter of fiscal 2019, Starbucks revised its North America loyalty program in a way that risked alienating members by providing more options but reducing discounts on higher-ticket items. Although it’s too early to fully judge results, Starbucks Rewards had a 15% year-over-year increase in active members, to 17.6 million, by the end of the fourth fiscal quarter. Starbucks Rewards represents 42% “of our tender right now,” chief operating officer and group president Americas Roz Brewer told investors.

By comparison, rewards membership in the fast-growing China market increased by 45%. And while mobile ordering for pickup and delivery didn’t exist a year ago, now 7% of sales come from Starbucks Delivery and 3% from mobile order for pickup.

“What you see is, the consumer base in China is much more digitally savvy than any other market in the world,” said president and CEO Kevin Johnson.

By comparison, Starbucks Delivers represents less than 1% of U.S. sales.

In addition to making investments in product innovation, Starbucks has been touting its Deep Brew initiative, which harnesses machine learning to inform things like labor and inventory optimization, machine maintenance and personalization of offers. A main goal is to use technology to create a better in-store experience, including freeing up staff to engage more with customers.

One example is the rollout of Mastrena espresso machines from manufacturer Thermoplan. In addition to cutting labor by producing a triple shot in one pull versus two pulls with other machines, they are linked to the internet of things.

“We can see every shot of espresso that's being pulled, and we can see centrally if there is a machine that's out there that needs tuning or maintenance,” Johnson explained. “And that allows us to improve the quality of the shots that we're pulling.”