HGTV Home-Buying Shows Give Way To Wall Of Spoons 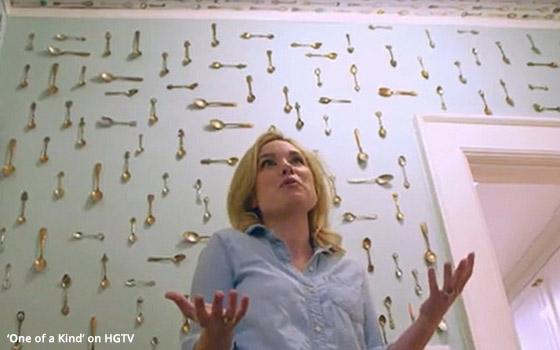 If the lady in the above photo seems puzzled by the many spoons installed on the wall and ceiling behind her, then she is not alone.

Viewers of HGTV might be puzzled too, every time they see this spoon-covered interior on promo spots running on the home-decorating cable channel for the show called “One of a Kind.”

It is one of the shows introduced recently on HGTV that has elbowed the long-running “House Hunters,” and its half-hour companion in the 10-11 p.m. hour, “House Hunters International,” out of the HGTV lineup for all but one evening during the week.

Formerly, the "House Hunters"/"House Hunters International" tandem was a 10 p.m. staple Monday through Friday for what seemed like years. It was so reliable that the thought that anyone would schedule the shows out of their nightly time slots seemed unthinkable.

It is now not only thinkable, but it has actually happened. On HGTV's current schedule, “House Hunters” and “House Hunters International” turn up during prime-time hours only on Wednesday nights.

And in a curious turn of events, the two have been reversed -- “House Hunters International” at 10 (Eastern) and “House Hunters” (in which the house hunts are all domestic, you might say) at 10:30.

Thus, millions who were long accustomed to watching the house-hunting shows every night on HGTV are now being forced to change their viewing habits.

The TV Blog cannot remember a forced behavioral change this significant and life-altering since Jay Leno ceded “The Tonight Show” to Jimmy Fallon on Feb. 24, 2014, a day that will live in infamy.

In place of the “House Hunters” duo, HGTV has added a slew of renovation shows. Somehow, someone at the network (or at its newish corporate parent, Discovery Networks) has formed the impression that home-renovation shows are a better draw than home-buying shows.

The exception to this line of thinking might be the network's Friday night staple, “My Lottery Dream Home,” in which house-hunting and -buying is still the big attraction.

Credit for the success of that show -- and possibly the reason why it too has not given way to a renovation series -- goes in large measure to the exuberant host of the show, David Bromstad.

In place of “House Hunters,” there are shows such as “One of a Kind.” As it happens, the lady in the photo is probably not too puzzled by this spoon-based design choice because she is the one who made it. She is Grace Mitchell, the designer/star of this show.

In the promo spots for this relatively new series, another interior is shown whose centerpiece is a partially rusted half of a Volkswagen Beetle body hanging on a wall. (The car's body had evidently been bisected lengthwise.)

It cannot be determined from the promo what the homeowners thought of this rusty piece of scrap metal mounted on their wall when they walked into the room for the first time in the show's “reveal” segment.

This kind of decorating is a matter of personal taste (gigantic rusty metal objects do nothing for me), but it goes hand-in-hand with other trends on display in the HGTV design shows -- from those infernal barn doors being installed everywhere to the “repurposing” of junk as objets d’art (such as the trio of broken cellos that the stars of “Fixer Upper” -- Chip and Joanna Gaines -- once hung on a newly renovated living room wall).

So, what's more exciting: The “reveal” segments at the conclusion of the home-renovation shows when the makeovers are unveiled? Or the reveals at the end of the home-buying shows in which the house hunters reveal which home they picked?

Around here, the house-hunting shows are the better of the two, hands down. Or to put it another way: When you've seen one HGTV backsplash reveal, you've seen 'em all.

tv
1 comment about "HGTV Home-Buying Shows Give Way To Wall Of Spoons".
Check to receive email when comments are posted.
Next story loading