Continuous Cable News Was Created 40 Years Ago This Week 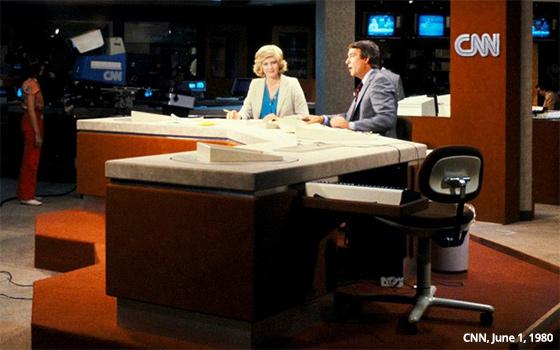 It seemed like a good idea at the time.

Of course it was a good idea: Launch a 24-hour news network on the relatively new and fast-growing television delivery system known as cable TV.

And so, the Cable News Network (CNN) was born -- 40 years ago this week on June 1, 1980. The network’s co-anchors at launch were a married couple, David Walker and Lois Hart (seen in the Day One photo above).

As a means for delivering television to households, cable TV had been around for several decades by the time a brash, Atlanta-based media mogul (and media hound) named Ted Turner came up with CNN.

But even in 1980, cable TV was still far from penetrating most of America’s TV households. CNN was part of the first generation of cable TV channels that helped the industry grow and achieve widespread household penetration throughout the 1980s.

Speaking from personal experience, I had no cable TV until around 1989, when it finally came to my neighborhood. And I didn’t live in the boonies somewhere. I lived in Queens, New York, in a community just across the East River from Manhattan.

The early cable networks were often the first and for a while, the only ones of their kind. CNN filled a 24-hour news niche that very likely would have been filled eventually by someone. It just so happened that Ted Turner got there first.

CNN then had the cable news field all to itself until 1996, the year when both MSNBC and Fox News Channel were launched in July and October, respectively. (CNN launched Headline News, a sister 24-hour news channel, in 1982.)

While both MSNBC and Fox News Channel played it straight when delivering the news during many of their daytime hours, prime time evolved into a free-for-all for partisan commentary -- MSNBC on the left and Fox News on the right.

As the two newcomers became better established, the straightforward approach to news that CNN had practiced since its inception became a liability, or at the very least, a drag on the network’s ability to compete in the new mouthy, partisan world of TV news.

For a long time, CNN tried to stay in the middle-of-the-road, middle lane of the cable news highway, but audiences gravitated to the opinion-news channels.

The result is that today, CNN’s talk shows -- and indeed much of its coverage generally -- has adopted a point of view that, at the very least, is left of center.

It is not what CNN once was. There was a time when CNN was considered the most reliable, most trustworthy source of news on television. Some might say the network hit its peak in the first Gulf War in 1991 when CNN and its swashbuckling correspondents took center stage.

But that was a long time ago. Our world has changed and so has our TV news. The 40th anniversary of CNN is as good a time as any to remember a time when the word “news” really meant news, and CNN was in the vanguard.