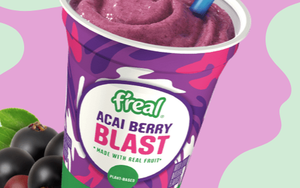 Having just launched six new SKUs of blend-it-yourself, frozen beverages, F’real decided to generate awareness with young consumers with a “Choose Your Alternate F’reality” campaign on Instagram and TikTok.

F’real has distribution in some 20,000 U.S. convenience stores, along with colleges and universities. In a virtually hands-free operation, frozen cups are mixed on-site in a F’real blender to the desired consistency of buyers.

In late May, F’real launched the #frealAF challenge on TikTok. Users were encouraged to create and share content by activating a QR code found on F’real’s social channels, digital ad units and the brand’s in-store blender screens.

“Originally, we wanted to do a live event in New York City. But we turned it into a virtual event because of COVID,” F’real director of marketing Hayden Perry tells Marketing Daily. “Throughout both of those events, we wanted to engage consumers and make them feel as though they were in the room with us."

As of today, the #frealAF challenge on TikTok had generated 28.6 million views.

The introduction of lower-sugar, plant-based smoothies and protein shakes had two main goals, according to Perry.

“Because we sell equipment into our C-store retail partners, we wanted to make sure that equipment is being fully utilized throughout the day. These new products were meant to attract some new consumers who might be looking for something slightly more healthful and also purchasing it with greater frequency.”