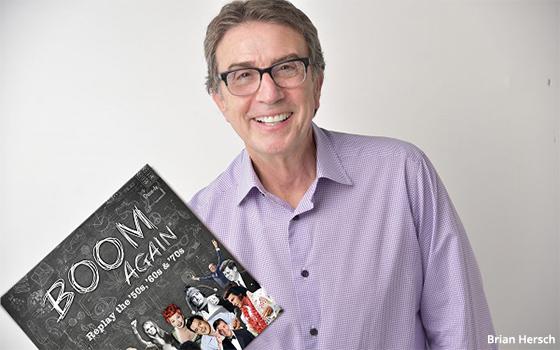 For me, it was the cigar box that made this pitch for a new trivia board game a winner.

That's the way it is sometimes. The reason why some p.r. pitches score bull's-eyes, and some do not, sometimes comes down to the purely personal.

I became hooked after I read in the press material sent to me earlier this week by a publicist I know that Brian Hersch, the creator of this trivia game called Boom Again, had decided to package the game in a container resembling the kind of old cigar boxes that many of us of a certain age used as children to store our keepsakes.

This clever bit of game packaging hit me where I lived. One of my grandfathers smoked cigars by the boxload and the other one sold them in his drugstore under his own brand name.

When I was a boy, my brothers and I were awash in cigar boxes. The drugstore ones were so old that they were made of wood.

Certainly, a publicist knows very little in advance about the personal preferences, tastes and quirks of TV columnists -- concerning cigar boxes or any other arcane subject -- before sending him or her a pitch email with an embedded press kit link.

If this cigar-box packaging is meant to evoke feelings of nostalgia in this game's baby-boomer target group, then it worked with me.

In fact, Mr. Hersch (pictured above holding a game box) seems to have put a great deal of thought into this trivia game -- from the box to the game pieces, and everything in-between. FYI, Boom Again costs $45 (including shipping and handling) and can be ordered on its own website, BoomAgain.com.

The game's pieces include an “insert adapter” from the era of 45-rpm records that made a record player capable of accommodating the large center hole of a 45; a replica of a “Students for Kennedy” campaign button from the 1960 presidential race; a genuine metal skate key; a replica of a Vietnam War-era dog tag; and a roach clip (which Hersch insists is a “working” replica).

To anyone who is reading this TV Blog and asking what this board game has to do with television, then the answer is: Many of its 2,200 questions are about television, and television commercials -- from the 1950s through the 1970s.

According to the press materials, Hersch was once a real estate developer in Los Angeles who caught the board-game bug when he observed how successful the old Trivial Pursuit game had become.

He decided to embark on the business of creating “party games” -- what he characterizes as “social-interaction board games.” His various creations include Taboo, Outburst, SongBurst, Super Scattergories, ScrutinEyes and many others.

In Boom Again, players not only answer questions. They also are asked to collaborate on various answers such as compiling a short list of favorite “I Love Lucy” episodes or singing out loud together.

Hersch feels that a team-oriented, collaborative board game such as Boom Again is “lubrication for rusty social skills” -- a phenomenon many might be experiencing right now in the era of COVID-related isolation.

“The categories in the game are designed to be far less intimidating than Science, History, and Sports,” says the game’s press release. “They include: ‘Things We Heard,’ ‘Things We Saw,’ ‘Things We Learned in School,’ ‘Stuff We Learned on the Street,’ ‘News,’ and a multi-answer category called ‘Shout’.”

“At its most basic, a great board game has to be fun,” Hersch says. “Most traditional trivia games are only satisfying for the brainiacs who get to show off how smart they are. The rest of us just get intimidated. Where's the fun in that?”