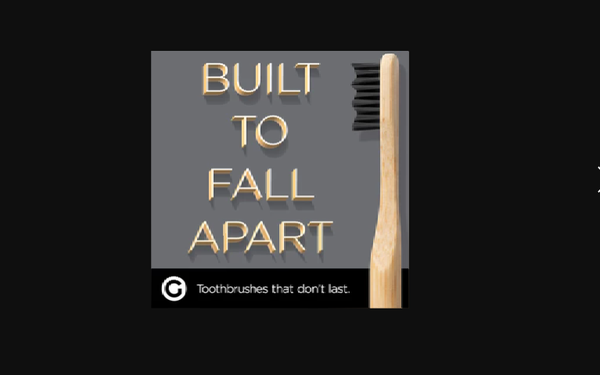 It’s not likely you’ll ever brag how long you’ve had your toothbrush, but marketers also don’t usually advise a brand to advertise a product’s planned obsolescence.

Start-up Goodwell Co. is now proclaiming in its first-ever ad campaign that it proudly sells “Toothbrushes that don’t last.”

The Goodwell brand is made out of bamboo, of which the earth has plenty, and its brush is biodegradable, unlike plastic toothbrushes (are there any other kind?), which don’t last in your bathroom but will be hanging around in landfills pretty much forever.

“With brand-new technology and the latest in recyclable and compostable materials, we’re fighting the good fight against pollution and single-use plastic,”  the Goodwell Co. website says.

Founder and CEO Patrick Triato says 850 million toothbrushes land up in landfills every year. That’s a hard-to-prove statistic  but it’s fair to say that hundreds of millions show up in dumps after a  few weeks of useful life.

In the  new ads, the  narrator is the voice of the bamboo toothbrush. In one spot, she is wistful. “How did I get here?” she asks. “I was born in a vast bamboo forest teeming with life. Now? Now all I see is the inside of Susan’s mouth.” Maybe not what she planned,, but the brush concludes, Susan is better than a hungry panda.

Triato self-funded Goodwell in 2014, inspired to create a D2C business. “The Dollar Shave Club had just hit it really big, so I thought, ‘What else can you sell on a monthly or bimonthly basis?’ ”

Toothbrushes! Triato says that as a product development and industrial design professional, the idea of  a better toothbrush seemed interesting. Traveling for a previous employer, he recalled being fascinated by a  bamboo toothbrush he’d seen in Taiwan, impressed by its sustainability quotient. He worked a while on the idea and finding a source for the bamboo.

“We were pretty much first to the market,” he says. “But now they’re ubiquitous.”

Environmental bloggers have taken notice of the Goodwell toothbrush alternative, which costs about $5. The brush is available on a subscription basis on the Goodwell website,  and Triato says consumers can find them in around 200 health food stores, mostly clustered on either coast.

“We’ve really had amazing good luck and been able to ride on earned media and so we haven’t had to use any paid media. We’re just trying to test our chops with paid media. We’d like to put a voice behind the brand,” he says.

And it would seem more advertising will be necessary. Goodwell is on the verge of debuting what Triato has called its “non-electric electric toothbrush.”

It’s called the Be Brush. It’s powered by a simple crank, without consuming electricity or batteries. It seems in tune with the times. On Kickstarer, Triato quickly raised over a half million dollars from consumers who want one.

The Be Brush will retail for $100 and will be shipped by the end of the year.

“It’s based on watch technology,” he explains. “There’s basically a big spring in there.You crank the handle a couple times and it runs just like an Oral B at 4,000 rpms a minute for two minutes. It takes more time to put the toothpaste on the bristle than it actually does to wind it up.”