AccuWeather Founder On 'Times' Fox Weather Story: What About Us? 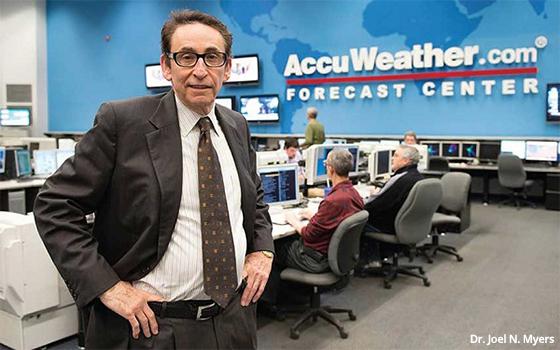 The founder and CEO of AccuWeather is crying foul because a New York Times story published last week about a new round of competition in weather reporting omitted his company, even though AccuWeather just might be the best-known weather brand on earth.

“The article in the Times was guilty by omission,” the CEO, Dr. Joel N. Myers, told TVBlog in a Zoom interview on Tuesday.

“We operate an AccuWeather cable channel, which is carried in 36 million homes. To not mention us as a major player … really is not good journalism,” said Dr. Myers.

Since launching his AccuWeather company in 1962, Dr. Myers has built it into a weather powerhouse providing weather information and forecasts to hundreds of TV and radio stations, newspapers and their websites, and scores of Fortune 500 companies in private industry.

“Not only do we win every statistical comparison of accuracy [in the weather-forecasting business], but we also take great care to word the forecasts, and communicate our forecasts and warnings in exactly the right way so people can make the right decisions,” he said. “AccuWeather in its history has saved tens of thousands of lives.”

But the story published last Wednesday (July 7) in the Times made no mention of any of that, to the chagrin of Dr. Myers. Instead, it focused mainly on a Fox News plan to launch a new streaming weather service some time in the third quarter of this year.

The service, to be called Fox Weather, was first announced last December. But in recent days, a number of news stories have popped up following a routine press release from Fox News late last month that announced the hiring of six new weather reporters who will work on the service.

In some of the stories, critics of Fox News and its journalism expressed concerns about its new weather service too, and how it will handle the hot-button issues of global warming and climate change, among other subjects.

One such story was published on TheGuardian.com just last Saturday with the headline “Fox News’ planned 24-hour channel has climate experts worried.”

And the Times story last week positioned the new Fox Weather as “a 24-hour streaming channel that promises to do for seven-day forecasts what Fox has done for American politics, financial news and sports.”

But AccuWeather’s Myers feels the attention being paid to Fox Weather is overblown. “There is obviously an appetite on cable for weather, [but] Fox is not even going to go on cable. They’re just doing streaming,” said Dr. Myers, who pointed out that The Weather Channel was included in the Times story, but not AccuWeather.

“We were not included in the article. Ridiculous,” Dr. Myers said. “We’re the biggest player. Fox announces they’re gonna do something that’s not even going to be on cable and it gets the big story? I felt that wasn’t right.”

Dr. Myers revealed to TVBlog that AccuWeather is close to announcing the launch of its own streaming weather service soon. Like Fox Weather, the new AccuWeather streaming service will be ad-supported.

He declined to join the chorus of critics who have been quoted recently voicing their concerns about Fox Weather. “I’m just going to talk about AccuWeather, what we’re proud of, what we stand for, what we deliver,” he said.

“I’ve been in business 58 years. I’ve seen probably a hundred companies in the weather field come and go. They couldn’t make it. And I learned early on not to comment on competitors.”

television, tv
3 comments about "AccuWeather Founder On 'Times' Fox Weather Story: What About Us?".
Check to receive email when comments are posted.
Read more comments >
Next story loading