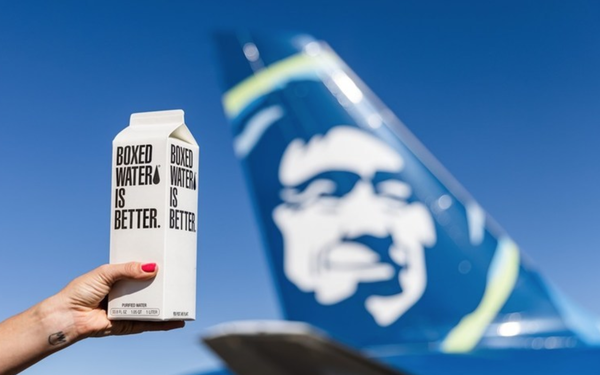 Alaska Airlines is putting its money where its mouth is and giving its inflight service a planet-friendly upgrade.

This change, which the company says is the U.S. airline industry's first in-flight service free of single-use plastic bottles and plastic cups, will save an estimated 1.8 million pounds of single-use plastics from flights over the next year, equivalent to the weight of 18 Boeing 737s.

Inflight water service is the most significant contributor of onboard plastic waste.

The airline is on a “continued journey” to minimize flight waste, says Diana Birkett Rakow, vice president of public affairs and sustainability for Alaska Airlines.

"As a West Coast-based airline, we fly to some of the most beautiful places on earth. Protecting these habitats is critical for our collective future, and reducing plastic waste is a key step," Birkett says in a release.

When Alaska became the first airline to offer guests Boxed Water cartons inflight in early 2021, surveyed fliers preferred Boxed Water over plastic bottled water at a rate of two-to-one, according to the airline.

Boxed Water Is Better’s ability to scale with Alaska from First Class to main cabin in just six months demonstrates both operational feasibility and the interest travelers have in more renewable inflight offerings, says Daryn Kuipers, CEO for Boxed Water.

Other major airlines have scaled back the use of plastic water bottles. Delta Air Lines only offers them to first-class passengers, with others being offered water service in plastic cups. During the pandemic, the airline went through massive amounts of plastic water bottles in its pre-packaged refreshment bundles in an effort to simplify service and reduce passenger-flight attendant interactions.

Alaska also has eliminated hundreds of single-use waste items and pioneered fresh food for pre-order. Offering fresh food for purchase via pre-order has dramatically decreased the food waste that was experienced pre-COVID, according to the airline.