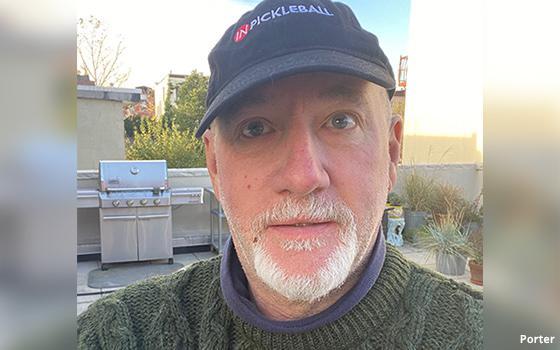 The rising sport of pickleball in the middle of a cultural zeitgeist moment, says Richard Porter, president of the new magazine brand InPickleball. And his new magazine plans to ride the wave.

Bloomberg, PsychologyToday, Vanity Fair, Allure, they’re all writing about pickleball,” Porter said in an interview this month. “It’s magic. I can sniff it.”

The magazine, which launched in July and just published its third issue, is sort of a throwback to the days of the splashy print-magazine launch, featuring A-list editors, designers and business executives. Think Oprah, Portfolio, Talk.

And those days, we might have rightly concluded, are long gone. So it’s interesting to note this new indie print-magazine venture. It’s helmed by the designer J. Armus — who worked at Oprah, Entertainment Weekly and Everyday with Rachael Ray — along with Meredith veteran Porter.

The premise: This is a fast-growing sport without a mass media voice. An official organization, USA Pickleball, publishes a monthly title about tournaments. It attracts around 2,000 subscribers.

But there’s nothing that really addresses the interests of the larger market of recreational enthusiasts. So Armus, Porter and their team saw an opportunity to fill the gap, and in the process, unify the nearly 5 million players in the U.S. around a media community that speaks to their passion.

The first issue had a free distribution of about 30,000, delivered via resorts, hotels and other venues known to attract pickleball enthusiasts. But then, Porter said, they started asking for more copies, so Porter bumped up the circulation to 45,000 as of the second issue.

The magazine is still in testing mode, a process made more difficult by the woeful state of print.

“Why a magazine?” Porter asks, repeating a journalist’s inquiry. “That was my first question. The magazine industry is not for the faint of heart. But the answer was good enough for me: The most active recreational players are 50+ You have a lot of golf and tennis players who are moving to Pickleball. Those are people who still read print. For folks 50+, reading still matters, and they still love print.”

Print magazines may be sort of old school, Porter says, but in one sense, they are are not. “Here’s what’s not old school,” he says. “First-party data. We have it. Recurring revenue. We have that. A subscription model. We have that. And it’s kind of easy to use the content creation process moving from one platform to another.”

Next up is the question of how much runway InPickleball has to get established. Are investors interested? Porter points out that Roku acquired This Old House Ventures in the first quarter of 2021. The burn rate is low right now, he says, and there’s an expectation that partnerships with organizations, including tournament operators and associations, will be a significant source of revenue. “We have a good runway.”

Still, for now, the indication is that reader revenue and advertising is a work in progress.

“We do have some advertisers,” he says. The magazine would work in particular for what he describes as “challenger brands. It could be the hair-care company, the auto company, the insurance company of pickleball,” he says. “On and on. Our job is to evangelize that case. We’re not ironic, not divisive, not cynical. We’re inclusive — young people and older people alike.”

It’s true, Porter says, that modern media directors likely grew up with digital media, social media and video, rather than print. And it’s true that if you went to a media agency today and asked whether the buyer knows how to read an old pink sheet from the Audit Bureau of Circulations, there would not be a lot of people who could. Still, he concludes: “We’re a small magazine — our page rate is not going to be huge. And if you think about the demographics in the sport, then print is a good fit.”

With the organic growth in the sport, manufacturers are finding themselves scrambling to keep up with inventory, Porter says. So maybe that manufacturer concludes it doesn’t need to advertise. Porter says that’s a wrong assumption. Sellers need to keep their brands front and center. Awareness at the top of the funnel is essential, he says — and smart marketers know that. Plus the ad rates are not prohibitive. “That to me sounds like an opportunity for negotiation.”

On the audience side, the situation is similar. “We do have some subscribers, and we will have some more next month, and more the month after that,” Porter says. “Circulation revenue is more stable, and frankly, investors today are more confident in that business model because of the recurring revenue.”

To do the testing and help grow the circulation, the magazine brought in veteran magazine-circulation expert Ed Fones. “We’re in the nascent stage of the sub-modelling,” Porter says. “It is growing, it continues to grow, we feel like we’re on plan.”

He acknowledges the ubiquitous presence of free media, but isn’t intimidated by it. “Our bet is on a high-quality package with great editorial. It’s the aspirational coffee-table look-and-feel, but also a users manual.”

The aim is to have a 10 times/year publishing schedule.

Ecommerce is a third revenue source, and Porter says it could be the largest of the three.

“If our brand is trusted, and we’re making good recommendations, we can expand a lot of great new experiences,” he says. “The model says we will initially have more sub rev than advertising revenue, and that over time, the advertising revenue will catch up and pass subscriptions. Ecommerce could be the biggest. If I make 20% on the paddle, that may be more than a subscription.”

For the moment, Porter says, “InPickleball is on a magical mystery ride. If the sport continues to grow by 20% a year, and it’s been doing that for a couple of years — this is a huge market. I think up is really, really high.”