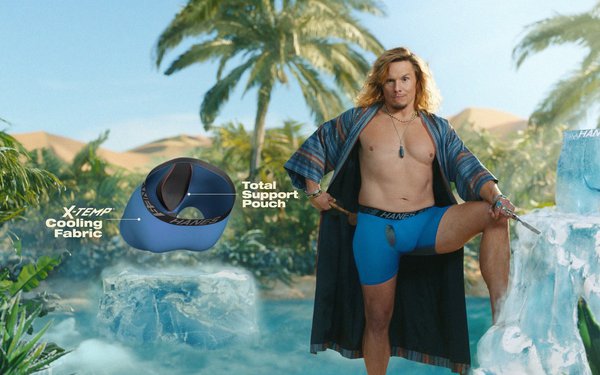 Hans is back. This time, the Fabio-esque actor is extolling the virtues of Hanes’ new X-Temp Total Support Pouch, a cooling version of the innovative pouch construction it launched last year.

With a camel and a meerkat, Hans is hanging out at a desert oasis, explaining how the new design not only “lifts and supports,” but “keeps me cool below my equator.”

The latest bare-chested installment builds on the company’s comical efforts to explain what turns out to be a complex product benefit.

Hanes, the No. 1 underwear brand, introduced the Total Support Pouch line a year ago. While plenty of niche and D2C brands offered the support of a pouch construction, it was far from mainstream.

“It’s like a bra for your balls,” a reviewer from Fast Company said after a test drive.

And while men might find all that cradling and separating delightful after wearing a pair, it’s not a need the average American man is aware of.

Hence the invention of Hans, who delights in a life of “ball-ance.” Played by actor Tony (“The Righteous Gemstones”) Cavalero, those spots rely on genital poetry: “When you cradle your nethers, life is light as a feather.”

And while customers like the new style, they also asked for performance fabrication they could wear while exercising. So the company combined the support of the pouch with its innovative X-Temp cooling fabric technology, a polymer that wicks moisture away as body temperatures rise.

In a category as full of comical ball references as this one, humor seems the only way to go. “We want to continue raising the bar on men’s underwear innovation and connect with guys in a culturally relevant way,” Chow says in an email to Marketing Daily. “We want to continue building brand affinity with our core consumers while connecting with younger audiences with engaging content."

The campaign, created by the Martin Agency, is breaking during the NBA Playoffs and will continue running on TV, OTT, and in social and digital channels.

We can relax on that score. In its latest financial report, HanesBrands announced double-digit gains in men’s innerwear sales and increased market share.

Chow also confirms that when it comes to men’s shorts, women still play a major role in shopping for men in their household, purchasing one of three pairs of men’s underwear.