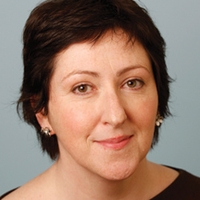 Jacqueline (Jac) Nolan EVP Executive Creative Director, Digitas Health LifeBrands New York Jac is a creative through and through. In her thirty-year career (and still counting), she has been responsible for advertising that has won literally hundreds of top awards at all of the major festivals: Cannes, Clio, D&AD, One Show and many more. Born in Paddington, Jac is a true Londoner whose creative career started at the age of 7 when she declared, “I want to be a commercial artist!” A few years later, she started to realize that ambition when she attended same art school as David Hockney, Michael English and Freddie Mercury. Since then she has explored many aspects of her creativity as an artist, art director, illustrator, comic strip artist, tutor, media buyer, improv writer, antique furniture restorer and creative director. Jac’s advertising career is just as varied, as she evolved from a traditional advertising art director to explore direct, digital, integrated and now healthcare, when she was asked to help found Digitas Health LifeBrands New York in 2007. Although relatively new to this category, Jac’s humanity and empathy has meant that she has become a passionate advocate for our agency mantra of ‘Helping not Selling’ and creating better healthcare communications for both consumers and professionals. She maintained an insatiable curiosity for ideas in any form, which has helped her create fully integrated agencies capable of working across every media channel available in her role as an agency leader for the last fifteen years. Today, Jac is never happier than when she is creating something new, fresh and exciting. So no change there then.