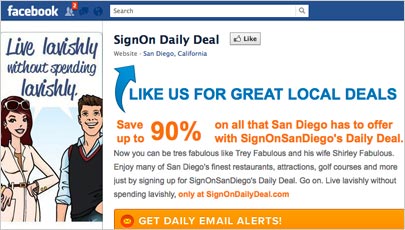 For brands, the real value of Facebook “likes” and Twitter followers remains uncertain. Their growing lust for such social admiration, however, does not.

So, how do brands get the most love on any given social network? With deals, deals, and more deals, according to new research from Nielsen/McKinsey's NM Incite.

Indeed, the top reason for following or liking a brand, company or celebrity on social networking sites is to receive discounts and special offers, according to a recent survey of global online consumers conducted by Nielsen.

"While some may argue that consumers’ interest in discounts has faded, Nielsen data shows the desire for deals is still strong worldwide,” concluded NM Incite.

In the U.S., NM Incite found that nearly 60% of social media users visit social networks to receive coupons or promotions, with 23% saying they do this on a weekly basis.

At 45%, North American consumers showed the strongest interest in using social media for deals, followed by consumers in Asia-Pacific regions -- 34% -- and Latin America -- 33%.

Globally, online consumers of all ages reported that receiving discounts and special offers was their top reason for liking or following brands.

Only respondents under the age of 20 and 55- to-59-year-olds -- i.e., not the biggest spenders for most brands -- were less likely to follow for this reason. Both demographics reported that they primarily engage with brands via social media based on friends’ recommendations.

Across a sample of ten major markets, including the United States, nearly 40% of active Web users visited coupons and rewards sites such as Groupon, Coupons.com and Living Social from home and work computers in September.

Compared to the same month last year, visits to these sites were up in each country except the U.K., while, in seven of the ten countries, daily deal site Groupon was the most-visited site in the category.

Meanwhile, when comparing visitors to social networks and blogs and those who visit sites that offer coupons or rewards, NM Incite found a strong overlap between the two categories. In September, 43% of visitors to social networks and blogs also visited a coupons or rewards site.  In addition, 44% of Facebook’s audience and nearly two-thirds -- 63% -- of Twitter's audience visited these sites.

In fact, after email and search, Facebook was a key source of traffic to Groupon and Living Social during September. That means, according to NM Incite, that Groupon’s and Living Social’s visitors came directly from Facebook -- further demonstrating that social networking plays a key role in driving consumers to seek out discounts and special offers.