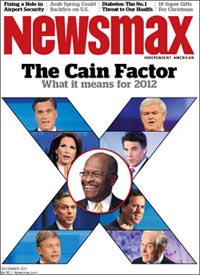 Newsmax, the right-leaning newsweekly that launched in January 2001 as a conservative antidote to the perceived liberal bias of publications like Newsweek and Time, is getting a new look. The redesign is in collaboration with New York City design firm Shostak Studios.

The redesign, which debuts with its December issue, is intended to give the magazine a more contemporary look, preserving its edgy sensibility while imparting greater seriousness and purpose.

Among the new design elements employed are new fonts throughout, new section headers and redesigned slugs with a more tailored, “buttoned down” look. The more playful “Maxlife” section of the magazine features body copy with a “ragged right” column style, for a more casual look.

Newsmax also rejiggered the size of some sections, giving some more editorial space and some less. Newsmax, the print companion to the popular conservative news and views Web site, has grown from newsletter format to a substantial print magazine over the past decade, benefiting from the heated political environment and controversies over issues like health care reform, spending, and taxes.

According to the December 2010 circ report from the Audit Bureau of Circulations, Newsmax had 223,787 paid subscriptions, and the magazine claims to reach a total audience of between 600,000 and 800,000 readers.

One of the oldest and best-known magazines devoted to video games, GamePro, is no more. Publisher IDG says it’s planning to pull the plug after its winter issue. The quarterly print magazine and Web site will both be closing after 22 years in the business, despite some recent success in digital publishing.

Editor Jaz Rignall tweeted the bad news: “Despite doubling our uniques and page views year on year, GamePro has been shut down.” Henceforth, visitors to the GamePro Web site will be redirected to the PC World Web site. Meanwhile IDG’s Consumer and Small Business Media Group will repurpose GamePro Media assets for custom publishing and video game branding projects as GamePro Custom Solutions.

Celebrity magazines have not been spared from the negative trends affecting other parts of the magazine industry, as illustrated by the recent announcements from two popular celebrity weeklies that they will be cutting their circulation guarantees. In Touch Weekly is reducing its rate base 18.8% from 800,000 to 650,000, effective this coming January. Bauer Media Group sister publication Life & Style is slashing its rate base 11.1% from 450,000 to 400,000, also effective January. Bauer Media Group president Ian Scott explained: “Rather than pumping up our circulation with off-price subscriptions, we are reducing our rate base guarantees and charging less, giving advertisers the best value in the category.”