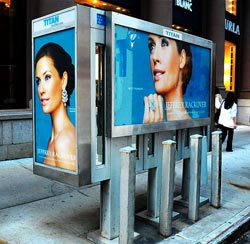 The kiosks are constructed of digital panels that are capable of delivering both HD video and static images, with ad rotations lasting seven seconds and 10 advertisers signing on at launch.

Depending on advertiser and public response, the Times Square conversions could herald a wave of digital phone kiosks popping up across NYC.

Titan has access to 2,552 payphones and 1,762 phone kiosks throughout the city, offering a total of over 5,000 advertising faces across the five boroughs.

Although phone kiosks may seem outmoded in an age of smartphones and tablet computers, they are still seeing substantial use, according to Titan, which reports that it collects a substantial amount of revenue on a daily basis from people making calls.

The kiosks also function as essential communications platforms by providing free access to the 311 information and 911 emergency hotlines. (In fact, the kiosks were the only means of reaching emergency services from public locations during and immediately after the terrorist attacks on 9/11.)

Scott Goldsmith, Titan’s chief commercial officer, stated: “Phone kiosks have been and continue to be a staple of New York City’s public communication outlets. Tourists and residents alike rely on them and they provide a necessary public service. What we are doing here is expanding the utility of the kiosk by providing dynamic advertising which will generate significant revenue for the City of New York.”