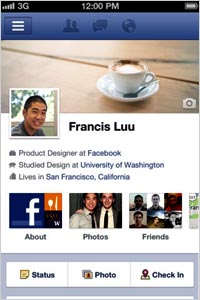 Following up a report from last summer, mobile app advertising and analytics firm Flurry says app usage continues to gain at the expense of the Web (both desktop and mobile). More Facebook users are increasingly accessing the social network via mobile applications than online.

Overall, average time spent on the mobile Web in December 2011 shrank for the first time in 18 months, from 74 minutes in June to 72 minutes. Conversely, time spent with apps increased to 94 minutes on average from 81 minutes during the same period. Flurry attributes that decline in Web use to people spending less time on Facebook on the desktop Web.

Based on data drawn from comScore and Alexa, the firm notes that Facebook users spent 24 minutes on average per day on the site, down from 33 minutes in June. Time spent on the Web without Facebook grew at the rate of 2% between June and December. (Flurry’s app data comes from tracking of more than 140,000 iOS and Android apps.)

“Based on our analysis, we believe that Facebook users, and users of other traditional style Web sites, are increasingly accessing services through mobile applications than from desktops,” stated a blog post today by Flurry’s Charles Newark-French. He points to recent Nielsen data showing Facebook is the most-used app on Android among people 14 to 44, outpacing usage of Google’s native, pre-installed apps.

Facebook Messenger ranked as the top overall app during most of the week between Christmas and New Year's Day in Apple’s App Store in the U.S. It was also the most-downloaded app in 2011 at least once across the 100 different geographic markets where the App Store is available.

Flurry believes Facebook’s reported efforts to develop a mobile platform dubbed Project Spartan that would work on the iPhone and allow users to bypass the App Store and download Facebook apps directly could lead to even more app use for the social network.

“As Apple and Google continue to battle for consumers through the operating system and devices, Facebook is demonstrating that it can leverage its hold over consumers at the software level, through the power of the social network, across multiple platforms,” stated the report.

The company will also look to make inroads in mobile games -- the top app category -- against Android and iOS this year. Longtime Facebook ally Zynga is also making a bigger push into mobile games to expand its user base beyond the social network. All of that could help boost app usage in the coming months.

Even so, Flurry did note the growth in time spent with apps is slowing -- from from about 23% between December 2010 and June 2011 to about 15% from June 2011 to December 2011. The time-spent gain is predominately being driven by people using apps more frequently rather than for longer sessions.