NCM Cracks Digital Da Vinci Code: Master Will Be Seen In HD, In A Theater Near You 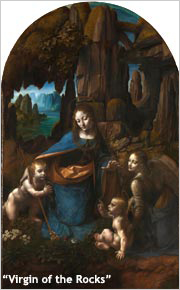 Since November 2011, a one-of-a-kind collection of the art of Leonardo da Vinci has been on display at London's National Gallery, including rare paintings from all over the world.

While it’s not uncommon for major museum exhibitions to tour other continents, in this case, it’s impossible to transport “Leonardo da Vinci: Painter at the Court of Milan," given the fragile state of the artwork.

Fortunately, art lovers and history buffs in the U.S. can still get a look at the exhibition -- in movie theaters.

The cinematic exhibition "Leonardo Live" is being staged by National Cinemedia in partnership with BY Experience and PhilGrabskyFilms.com.

Hosted by art historian Tim Marlow and presenter Mariella Frostrup, the documentary was filmed in HD shortly before the National Gallery exhibition opened to the public.

It includes a virtual tour of the show with commentary from scholars and curators explaining the context and significance of each piece, including a number of pieces by da Vinci's disciples.

Paintings highlighted in the exhibition include the “Belle Ferronière,” loaned to the National Museum by the Louvre, the “Madonna Litta,” loaned by the Hermitage in Saint Petersburg, two versions of “Virgin on the Rocks,” from the National Gallery and the Louvre, and the never-before-seen “Salvator Mundi,” which was only discovered to be a da Vinci in 2005 after years of private ownership.

"Leonardo Live" will be digitally broadcast by NCM to 450 movie theaters nationwide on February 16 at 7 p.m.