Ecommerce Spend Rockets To $1B 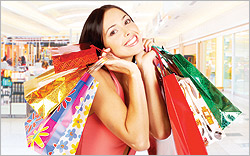 Blurring the lines between “Black Friday” and “Cyber Monday,” ecommerce spending on Friday surpassed $1 billion for the first time.

That’s according to the latest data from comScore, which recorded $1.042 billion in online sales on Black Friday -- a whopping 26% increase from last year.

“Despite the frenzy of media coverage surrounding the importance of Black Friday in the brick-and-mortar world, we continue to see this shopping day become more and more prominent in the e-commerce channel,” notes comScore Chairman Gian Fulgoni.

For the holiday season-to-date, $13.7 billion has been spent online, marking a 16% increase year-over-year.

Thanksgiving Day, which has traditionally been a lighter day for online holiday spending, achieved a robust 32% increase to $633 million.

Still, Cyber Monday is expected to be the heaviest online shopping day of the season, with sales approaching $1.5 billion or even higher, Fulgoni predicts.

All told, 57.3 million U.S. shoppers visited online retail sites on Black Friday, representing an increase of 18% versus a year ago.

Amazon ranked as the most visited online retail site on Black Friday while also posting the highest year-over-year visitor growth rate among the top five retailers.

For the holiday season-to-date, digital content and subscriptions are leading the way as the top-growing online retail product category -- up 29% versus a year ago. The rapid adoption of smartphones, tablets and e-readers continues to drive demand for digital books, audio and video content.

Toys are also performing well online thus far with a gain of 27%, followed by consumer packaged-goods -- up 23% -- video game consoles and acccessories -- up 18% -- and consumer electronics -- up 18%.

The apparel and accessories category had a  strong Black Friday, ranking as the top category for online spending on that day and accounting for more than one-quarter of all dollars spent.

The category has historically ranked second behind computer hardware, as it did on Black Friday 2011.