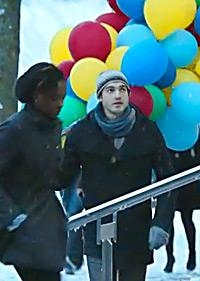 In its ongoing effort to shed its mall-dusty image, Zales is rolling out new Millennial-loving “Let Love Shine” campaign, just in time for the holidays.

Dialog-free spots, powered by tunes from such breakthrough performers as Lord Huron, Shovels and Rope, Kat Edmonson, and Amy Stroupe, “portray love and emotion in a very real, authentic and relatable way,” says Coley Platt, VP/account director at GSD&M, Zales’ agency. “Everyone has a different idea of what love is. So rather than use words, we wanted to let the music be the voice you hear.”

The challenge, he tells Marketing Daily, is that while Zales has “long been known as 'The Diamond Store,’ that’s a fairly rational pitch. We wanted to combine that with emotion, in a way that would work for both grand sweeping gestures, like the marriage proposal in the Balloons spot, and more everyday moments, like the couple in the Laundromat in Paris.” The TV spots, running on cable, are aimed at a male audience, and include the NFL and the "Walking Dead." They focus on Zales’ recently reintroduced Celebration bridal collection.

Other elements of the campaign including print and digital focus more on the types of diamonds and the kind of cuts available, he says -- and are supported by YouTube, Facebook, Twitter, and Instagram efforts.

Zales, back in the black after a period of declining sales, has been systematically trying to modernize, and convince a younger generation to step inside. Merchandising changes in recent years have included a line of candy-colored diamonds, as well as the Vera Wang Love collection. And the brand takes credit for launching The Black Keys to fame, licensing their music for a TV spot in 2010, as well as Alabama Shakes and Various Cruelties.

The campaign will run through the holidays, gearing up again for key Valentine’s Day and Mother’s Day selling periods.