Viewability is one of the hottest topics in digital advertising today, as is real-time marketing.

Keeping up with the times, marketers can now immediately cut ties with a site that is underperforming based on their viewability criteria -- something TubeMogul says has not been easy to do because most of the reporting is done on a campaign as a whole or on the publisher’s side. TubeMogul wrote in a statement that this makes “acting on the information difficult.”

The common definition of “viewable” for display ads is at least 50% of an ad being in-view for at least one second. TubeMogul takes it a step further, because it contends that video ads have extra components.

The reporting tracks whether or not the video is muted, the size of the video player, whether or not the window is active (different tabs, etc.). It does also track how long the video was in-view for and how much of it was in view it, but it doesn't treat all ads that reach the standard definition of “viewability” as equals. 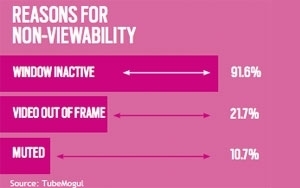 According to a TubeMogul whitepaper on the topic, the biggest reason video ads are not viewed is because the window the video is playing in is inactive; that’s the case for 91.6% of all non-viewed video ads.

The video being out of frame (21.7%) and the computer being muted (10.7%) are the second and third most common reasons, respectively. These three reasons can overlap (i.e. the window could be inactive and the computer muted).

Even with its new reporting system, TubeMogul acknowledges that over one-third of video ads cannot be measured for viewability. The whitepaper cites videos loading in an iFrame as the number one reason for this. The report says iFrames “typically mask where an ad is really running and block domain-level visibility.”