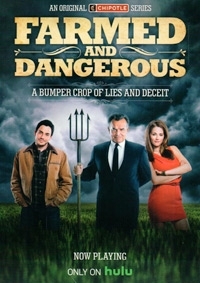 I love burritos, because of course I love burritos. Who doesn’t love burritos? They’re one of God’s blessed gifts to all his precious little children, right up there in the divine-munificence hierarchy alongside sunshine and power tools.

Because I am an ignorant slob, however, I do not invest much thought into the origin of the foodstuffs that be-lard my burritos. I try to eat/inhale them at restaurants that appear to have been mopped within the last 72 hours and/or aren’t wallpapered with notices of health-code violations. But beyond that, I am less a fan of specific purveyors than I am of the burrito genre in and of itself.

Which brings us to Chipotle Mexican Grill, one of our nation’s most beloved mass-market artisans of tortilla-encased wonder. I am a huge fan of Chipotle burritos, owing to their consistency (literally - they’re as solid in one’s hand as a phone book) and what gourmands might refer to their deliciocityness. I consume one Chipotle burrito every 10 days or so. I have no regrets or chronic medical conditions.

Judging by the ever-expanding number of franchises - within my immediate notice, anyway - I’m not alone in my love of all things Chipotle. That’s why, after digesting (hoy-o!) the entirety of the funny, pointed and altogether enormously entertaining “Farmed and Dangerous” in a single 85-minute sitting, I’m wondering why the company won’t relent with its freshness-first branding.

A satire which pits the interests of big agriculture against those of humble, hard-working family farmers, “Farmed and Dangerous” finished its four-episode run on Hulu earlier this week. Upon completion, I was bummed that Chipotle hadn’t picked up the tab for eight or nine more installments.

In terms of pacing, sheen and absolute refusal to pull its punches, “Farmed and Dangerous” is without peer in the world of longer-form scripted brand content. Hell, it stacks up favorably against any comedy NBC has debuted since “Community” (okay, that wasn’t the compliment I intended it to be - you know what I mean). The series pits the operatives of the Industrial Food Image Bureau (I.F.I.B. - get it?) against a cutie-charmy muckraker intent on exposing the practices of Animoil, a company whose petroleum-fed cows have an unfortunate tendency to combust.

“Farmed and Dangerous” telegraphs its plot arc six minutes into the first episode, when the smartie-hottie I.F.I.B. operative tells her cohorts that she’ll take care of the cutie-charmy guy. We’re all hardened and wise in the wake of too many Kate Hudson rom-coms; we know that smartie-hottie will eventually see the evils of industrial agriculture, fall for cutie-charmy after experiencing the rustic magnificence of his family farm and dump her slimeball boyfriend, whose overreliance on hair product broadcasts his sliminess. It’s how these things work.

But knowing where the plot will lead doesn’t diminish the series’ charm or cleverness one iota. And, man, give a raise to whoever punched up the script with the type of edgy humor - relatively speaking - that usually doesn’t survive the first draft of a company-endorsed piece of content.

The best one-liners are given to I.F.I.B. chieftain Buck Marshall, played by the great Ray Wise; he delivers them with sneery aplomb, whether in opening a rapid-response video with “you might have seen something claiming to be on your Internet…” or in arguing that “more cows die filming Johnny Knoxville movies than in explosions.” There’s also a dream sequence that touts the benefits of “milk-style food products,” a quick dismissal of the FDA as impotent and a smattering of sharp-elbowed media satire, including a relevance-related jab at the Washington Post and a barbed dissection of forced-perky morning-show banter.

What I don’t get here is the why. Chipotle wants to re-re-re-reinforce its rep as the only fast-casual chain that cares about the origin of its products? Okay, fine. There’s a danger in striking that one note too often and too hard, though. At this point, Chipotle may have branded itself too effectively: I’m half-wondering what secret shame the sustainability-and-freshness-4-life appeal is designed to obscure. Perhaps it’s that the company’s growth was funded in part by McDonald’s? Hey, we all have some ragweed in our family trees.

Nobody cares. The inventive sequences that play beneath the opening credits (big props to the skateboard-cam), the visual palette (I.F.I.B. and Animoil baddies are outfitted in the dustiest of charcoals), even the meta wink in the final episode (one of the IFIB spinners proposes a series satirizing boosters of sustainable agriculture) - there’s so much to like here, more than enough to make you excuse the relentless drumbeat of Chipotle’s fresher-than-thou branding and the punny episode names (“Ends Meat,” “Raising the Steaks”).

“Farmed and Dangerous” works incredibly well as entertainment and, for anyone who cares enough to listen, it communicates whatever its corporate benefactor feels the need to communicate. You can’t do brand content much better than “Farmed and Dangerous,” but here’s hoping its note-perfect execution will inspire others to try

video
1 comment about "You Can't Do Brand Content Much Better Than Chipotle's 'Farmed And Dangerous'".
Check to receive email when comments are posted.
Next story loading