Programmatic Trends: Retail Down, Travel Up In Q1

As one would expect, Q1 “saw a seasonal decrease in all programmatic display KPIs.”

In retail, for example, spend was down 14% quarter-over-quarter, while clicks (-29%) and impressions (-6%) were also down. This is consistent with retail trends, the report notes, as the vertical typically dips after a holiday-filled Q4.

Not every vertical saw a decrease, however. IgnitionOne found that the travel vertical saw quarter-over-quarter growth in Q1. The number of travel-related impressions traded 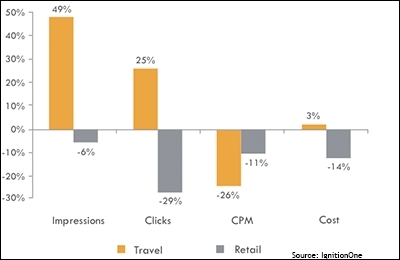 The report can be found here.