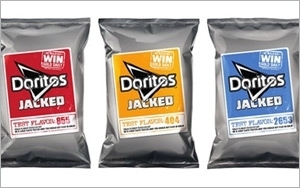 It's not every day that you see a major food brand selling products in supermarkets with labels like "Test Flavor 855."

But that's what Frito-Lay is doing in its latest promotion for Doritos, dubbed a "Bold Flavor Experiment."

That name is fitting in more than one way, since the brand is betting that consumers will be willing to pay a suggested retail of $4.29 for 10 ounces of "mystery flavor" chips (or $1.49 for a small bag).

Three mystery flavors of Doritos Jacked -- the brand's "jacked-up flavor" line -- are being sold in grocery stores across the country. The bags bear the Doritos Jacked logo, but are identified by one of three different test flavor numbers instead of actual flavor names. (Consumers can read the usual, government-required lists of ingredients on each variety, but discovering how they actually taste in combination requires sampling the product.)

Doritos is asking consumers to try all three flavors and vote for their favorite on a Bold Flavor Experiment site, using promotional codes supplied on the bags (or obtained through an 800 number), starting April 29. The winning flavor will become a regular offering, with standard packaging, to be available at retail starting this fall.

Fans will also be invited to participate in a scavenger hunt that will reveal clues to the names of the mystery flavors. During the summer, the brand will reveal the three flavor names, along with the winner determined by the voting.

Along with the voting instructions, one element that is highlighted on the mystery flavor bags is a "Be Bold, Win Gold" sweepstakes (inspired, says Frito-Lay, by the Doritos name, which means "little bits of gold" in Spanish). Those who register and vote for their favorite mystery flavors earn chances to win one of 60 daily prizes: $1,000 in gold.

The promotion -- like Doritos' hugely popular "Crash the Super Bowl" initiative, and its recent campaign challenging fans to go on "Bold Missions" to earn access to view a live-stream of Lady Gaga's Doritos-hosted performance at SXSW -- are part of the brand's global "For the Bold" marketing campaign.

"Our Bold Flavor Experiment is the latest example of how we're rewarding our fans for making bold choices -- this time by trying our mystery Doritos Jacked flavors and voting for the bold flavor they like best," summed up Ram Krishnan, VP of marketing, Frito-Lay.

Doritos actually started running experimental flavor promotions several years ago, reminds Bloomberg Businessweek. In 2007, its "X-13D Flavor Experiment" asked fans to name a new chip (which may or may not have been the All Nighter Cheeseburger flavor that was marketed a few years later). In 2008,  its "The Quest" promotion asked fans to guess a mystery flavor (ultimately revealed to be Mountain Dew-flavored Doritos).