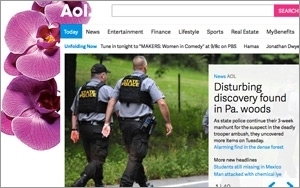 AOL and MSN are expanding their content-sharing partnership, which means a lot more AOL content appearing on MSN properties. Per the pact, MSN will now feature both video and news content from The Huffington Post, Engadget, TechCrunch, StyleList, and other AOL properties.

The news comes on the heels of an integration that brought video content to MSN and Bing apps -- and the Windows Phone -- from AOL brands and partner sites like HuffPost Live and TechCrunch.

“The biggest change … is the type and amount of content that AOL is providing MSN,” Frank Besteiro, vice president and head of business development and partnerships at AOL Video, said Monday.

“Now, MSN has access to [AOL] content spanning both video and written news articles from our marquee brands … for use on MSN's Web properties, as well as software and hardware platforms,” Besteiro said.

The deal follows the relaunch of Microsoft’s flagship Web portal, MSN.com, earlier this month. Upon the relaunch, Microsoft said it planned to release a suite of new MSN-branded applications across Windows Phone, iOS and Android. The broader initiative was expected to result in a number of new opportunities for brands, as well as content partners like AOL.

For some consumers, the notion of Web portal as digital gatekeeper harkens back to the days before mega social networks and mobile apps.

In terms of unique visitors, however, the numbers tell a different story. Stateside, Google, Yahoo, and Microsoft properties each bested Facebook (and every other Web property) in February, according to comScore.

To explain AOL’s broader strategy, Besteiro cited “synergy” -- a word often used by AOL and Time Warner executives in the 1990s to explain their fated merger.

“The reason this deal has such a high potential for success is because both companies are playing to each other’s strengths in a highly collaborative environment,” Besteiro said. “We enable MSN to build out their content offerings, and in turn, MSN allows us to expand our distribution and overall footprint.”