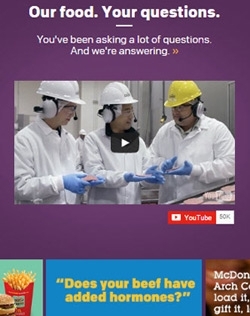 Faced with growing competition from QSRs positioned as offering healthier, more natural food and persistent same-store sales declines, McDonald's is using social media and videos to debunk what it terms "myths" about its burgers and other offerings.

In the campaign, tag-lined "Our Food. Your Questions.," the world's largest fast-food chain is encouraging U.S. fans and skeptics alike to submit their questions about McDonald's' food on Facebook, Twitter, YouTube and other social media.

The chain is addressing some of the more common questions, misperceptions and rumors with informational videos — including ones hosted by Grant Imahara, former co-host of Discovery Channel's "Mythbusters," who was filmed visiting McDonald's suppliers and restaurants.

The campaign, which will also include TV spots and other advertising to drive awareness and consumer participation, signals that McDonald's has committed to delivering "faster, more straightforward responses to questions about our food," Ben Stringfellow, VP of communications at McDonald's USA, told USA Today.

McDonald's is clearly betting that the informational value and perception of transparency created will trump the risks involved in publicly taking on the frequently unappetizing or even disgusting rumors about its food.

Further spreading the rumors is one risk, although when they're already rampant in the uncontrollable greater social environment, there's potentially much to gain and relatively little to lose by confronting them head-on on a brand's own social media properties and Web site.

A potentially greater risk is that the campaign could be perceived as disingenuous or worse by the public in general, and particularly by the Millennials whom McDonald's most hopes to woo.

The humorous — sometimes verging on flippant — nature of some of McDonald's' content seems intended to offset the potential for consumers challenging or dismissing the videos and other responses as being staged or mere PR. (That, unsurprisingly, was the drift of many, though by no means all, of the voluminous consumer postings on McDonald's' YouTube and Facebook sites in the first day following the campaign's Oct. 13 kickoff.)

For instance, in one Imahara-hosted video answering the question "Is McDonald's beef real?," Imahara jovially asks a supervisor in one of the Cargill plants that supplies McDonald's' beef: "Are there lips and eyeballs in there, Jimmy?" He also raises the questions of whether the beef contain so-called "pink slime," and even worms. The plant reps' answers to all of those questions are, of course, a resounding "No."  ("It's 100% beef trimmings from the cow," sums up one.)

That video had pulled nearly 140,000 views within a day after its posting.

On the chain's site, questions answered include the one about whether the beef contains worms (answer: "No. Gross! End of story.); "Why doesn't your food rot?" (answer: It does, when there's moisture to enable mold, but when there's not, it just dries out or dehydrates); and "Do you use real chicken in your Chicken McNuggets?" (answer: Yes, white meat chicken cut from the tenderloin, breast and rib meat).

McDonald's has already implemented similar campaigns in Canada and Australia, and the results presumably have been positive enough to warrant extending the concept to the U.S., its biggest market.

McDonald's bucked the sales declines seen by most of the restaurant industry during the most severe years of the recent recession, as it continued to show nearly uninterrupted sales gains. But shifts in Americans' food preferences have since taken their toll.

The chain's U.S. same-store sales were down 0.2% last year, down 1.5% in this year's second quarter, and down by a particularly significant 2.8% in August.